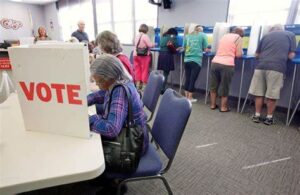 If ever there could be a case for a class-action lawsuit against a high-profile public figure, I am beginning to think that elections officials throughout this great nation might have one.

The former Slanderer in Chief has defamed the reputations of county, state and local elections officials everywhere by insisting that the 2020 presidential election was “rigged,” that it was fraught with “widespread voter fraud” and that it was “stolen” from him.

Class-action suits usually are filed by large numbers of people or groups who contend they have been damaged by allegations made in public that defamed their character.

POTUS 45 has done all of that, and more, by suggesting the 2020 election didn’t really deliver the presidency to Joe Biden, that the former POTUS actually won in a “landslide.” Has he produced a scintilla, a shred, a sliver, a smidgen of proof for any of this? No! He just says these things and others believe him.

I do not believe anything that flies out of the liar’s pie hole.  Nor should anyone else … but they do, to their shame.

I have known too many dedicated elections officials in counties where I have worked over nearly 40 years in daily journalism. They all take their jobs seriously. They all take an oath to defend the Constitution and have followed that oath to the letter.

I realize I am not King of the World. For that matter, neither is the former POTUS who once declared that “I, alone, can fix” what is wrong with the nation. The stark truth is that he hasn’t fixed a damn thing. Just maybe there might be enough justice left in this world for local elections officials whose reputations have been damaged to take legal action against an individual who embodies political corruption in its lowest form.