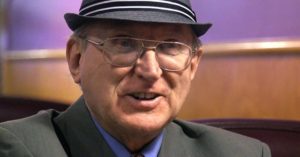 I don’t know who coined the phrase, although I heard the late Texas Gov. Ann Richards say it once or twice.

“You dance with them that brung ya.”

So it is that Illinois Republican voters are facing a strange election season this fall. The GOP primary in a Chicago-area congressional district has nominated an avowed Nazi and a Holocaust denier. His name is Arthur Jones. None other than the Cruz Missile himself, Texas U.S. Sen. Ted Cruz has urged voters in that congressional district to vote for the Democrat rather than the Republican nominee.

Cruz tweeted: “To the good people of Illinois, you have two reasonable choices: write in another candidate, or vote for the Democrat. This bigoted fool should receive ZERO votes.”

The state GOP is trying to find a way to run an alternative candidate against incumbent Democratic U.S. Rep. Dan Lipinski. I’d say Lipinski will win in the heavily Democratic district, but then again, I thought Hillary Rodham Clinton would be elected president of the United States in 2016.

Here is how Politico reported the story.

Well, I am afraid the Republican Party primary has produced a winner. Art Jones is the man slated to run for Congress. The GOP sought to get Jones pushed off the ballot; it tried to find someone to challenge him in the primary. They failed. Jones was nominated.

Should the GOP succeed in finding an “alternative” candidate? We’ll see about that. It looks to me as though Republicans will have to “dance” with the guy they nominated.

Or … they can vote for the Democratic incumbent.

If only the president of the United States would stop his stereotyping of political foes.

Such as what he did on thisTwitter message: When people come into our Country illegally, we must IMMEDIATELY escort them back out without going through years of legal maneuvering. Our laws are the dumbest anywhere in the world. Republicans want Strong Borders and no Crime. Dems want Open Borders and are weak on Crime!

Hang on a second.

I happen to align with the Democratic Part. Do I “want Open Borders” and am I “weak on crime!”?

I beg your pardon, Mr. President.

I happen to support the president’s desire to invoke “extreme vetting” of immigrants. I also want to see border security increased, updated, modernized.

None of this seems to deter Donald John Trump from inflaming passions by his mischaracterization of his foes’ motives. It does fire up the base, which is the only audience that matters to the president.

As for his desire to toss all immigrants out without going through a legal process, I find that to be inherently un-American.

It’s the kind of rhetoric one hears from autocrats and, oh yeah, dictators. 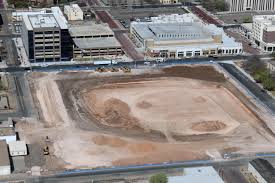 AMARILLO, Texas — This just in: The multipurpose event venue that is under construction in downtown Amarillo will be done by February and will be all set to go when the city’s new AA minor-league baseball team starts playing hardball next spring.

How do I know that? I have no first-hand, insider knowledge. But I did hear it today from a former mayor under whose leadership this project was launched. I caught up with Paul Harpole today at the Route 66 festival occurring along Sixth Avenue.

Harpole said the work crews have benefited greatly from the lack of moisture during the winter of 2017-18 and in the first half of this year. They’re goin’ and blown’ at the construction site along Buchanan Street, Harpole indicated.

So, you see? There really is a benefit — if you want to call it that — to enduring a drought.

I don’t intend to make light of the drought conditions. Farmers and ranchers are struggling through it. I feel badly for them and the difficulty they are enduring.

However, the MPEV needs to get done in time for the opening of the Texas League’s 2019 baseball season, which will include a franchise based in Amarillo. It will have moved here San Antonio, which is getting a AAA franchise that is transferring from Colorado Springs, Colo.

If the lack of moisture means the construction crews will be able to plow ahead unimpeded by Mother Nature’s occasional fits of wrath, then that’s all the better for the city … and for the Texas Panhandle. 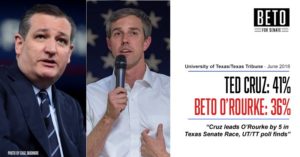 U.S. Rep. Beto O’Rourke is expressing optimism in a new University of Texas/Texas Tribune poll that shows his race with U.S. Sen. Ted Cruz narrowing to just a five-point margin for the Cruz Missile.

The poll puts the Republican Cruz at 41 percent; the Democratic challenger, O’Rourke, is at 36 percent. When I examine these polls, I tend to look at the 50-percent threshold. Neither of these fellows is close to it. That renders these poll numbers virtually useless.

O’Rourke, though, said this via Twitter: A brand-new poll has us down by just 5 points. We’re closing the gap in this race for Senate — and we rely 100% on grassroots donations from people like you to power our campaign. Let’s keep the momentum going and get Beto in the Senate!

Hey, I want O’Rourke to represent me in the U.S. Senate at the start of 2019. The young man needs to stop getting ahead of himself. 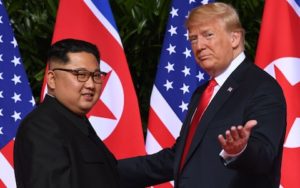 News reports of the past day or two tell us that North Korean dictator Kim Jong Un has been, um, lying about his pledge to work toward getting rid of his nuclear arsenal.

Donald J. Trump had that meeting with Kim this past month and praised the former Little Rocket Man with heaping praise about his honesty, trustworthiness and commitment to peace on the Korean Peninsula.

Now there’s possible word that Kim has been accelerating nuclear testing at secret sites. He isn’t winding ’em down!

Could it be that Little Rocket Man has taken POTUS for a joy ride aboard a nuclear-armed clown car?

Hey, I’m not making light of this. The president’s assurances about Kim’s commitment to peace needed a lot more “extreme vetting” before he offered them to the rest of the world. 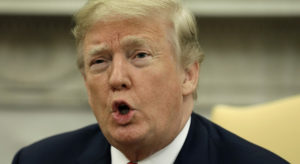 I won’t spend a lot of time on this blog post.

Instead, I choose to share a Salon.com article that interviews a journalist who says he has covered Donald John Trump for the past three decades. David Cay Johnston, who’s been awarded a Pulitzer Prize for his work, claims to know the president well.

I believe that he has the chops to say some of the things he has said about Donald Trump. That the president is “anti-Christian,” that he is a racist, that he comes from a family of criminals, that he is “ignorant about almost everything.”

He also believes that investigators well might have evidence that the president is a traitor.

Here’s the article. Take a look.

It will give you the heebie-jeebies.

So help me. It will. 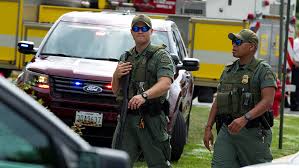 I am going to steer far from any discussion about what motivated the mass murderer this week in Annapolis, Md.

Also, I will not discuss the issue of guns, gun control or gun rights.

Instead, I merely want to lament briefly the terrible state of our union in the context of the murder of five newspaper employees. A gunman with a shotgun sauntered into the Capital-Gazette office and opened fire.

He killed four journalists and a sales assistant and “gravely injured” two others.

I damn near have run out of expressions of outrage over this latest act of insane senselessness. Children get slaughtered in our public schools; nightclub patrons are murdered; a crowd of country music festival attendees runs for cover as a gunman opens fire on them with a “bump stock” rifle that has effectively become a machine gun; shopping mall customers have fallen; so have movie theater customers.

What the hell is going on in my country?

The president who vows to “put America first” seems tone deaf to how the world is viewing this nation of ours. Other Americans are not. I happen to one who is terribly concerned about what the world thinks of us, how it perceives Americans. I want the world to think well of Americans and of our country.

Donald J. Trump tells us the world “respects” us again. Does it? Can it possibly “respect” a nation where citizens open fire on their fellow citizens?

Yes, this is all happening as the nation grapples with immigration policy and its treatment of those who seek to come here in search of a better life.

I have to wonder: How much better can life here be when gunmen open fire without warning on people who go to work never expecting that they would die?

Yes, we are in trouble. 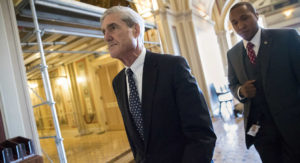 Congressional Republicans keep harping on the length of time special counsel Robert Mueller has been investigating whether the Donald Trump presidential campaign “colluded” with Russians who meddled in our 2016 election.

They keep saying it’s gone on too long. They want Mueller to wrap it up now.

Mueller has been given the opportunity to find the truth to a highly complicated set of issues. The president keeps saying there was “no collusion.” He keeps calling the investigation a “witch hunt.”

If that’s the case, then let the probe continue to its conclusion.

And has anyone noticed that Mueller’s team has been water tight? There have been zero leaks? Can the president’s team make that claim? No.

Let the special counsel reach his conclusion at his own meticulous pace. Then let the man deliver his report to the nation.

And stop griping, Republican partisans, about the length of time he’s taking. 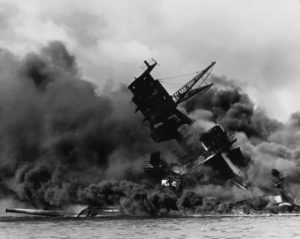 AMARILLO, Texas — I guess it can be stated clearly: A piece of one of the darkest days in U.S. history is going to adorn the Texas Panhandle War Memorial in south Amarillo.

It’s the product of some wheeling and dealing by Randall County Judge Ernie Houdashell, who has been working with federal and state of Hawaii officials to bring a piece of the USS Arizona to the Texas Panhandle.

They’re going to add the piece to the War Memorial on Pearl Harbor Day, Dec. 7. It will arrive around 11 a.m. Saturday at the Randall County Event Center, where they’ll have a welcoming ceremony.

This is an extremely poignant addition to the War Memorial, which already includes — in addition to the stone tablets chronicling the conflicts this nation has engaged in and those who died in them — an F-100 Super Sabre jet and a UH-1 Huey helicopter.

The Arizona was one of several big ships sunk in Pearl Harbor more than seven decades ago in the event that brought the United States into World War II. President Roosevelt called it a “date which will live in infamy.”

It’s a date we cannot forget. We must always remember it.

Judge Houdashell told me some months ago about the Arizona memento coming here. He was thrilled beyond belief to get it done.

I am proud of my friend for scoring this magnificent addition to the War Memorial.

A comedian posing as U.S. Sen. Bob Menendez, D-N.J., has spoken with the president of the United States … who was flying on Air Force One when he took a phone call.

“Menendez” asked Donald Trump all kinds of pointed questions about immigration policy and about his upcoming choice for the U.S. Supreme Court.

But that’s all beside the point. The real point is this: How in the name of high-tech security did this guy get through to the president of the United States of America?

America, we have a problem. A big one, too! No goofball comedian should be able to patch a phone call through to the president. Not ever! Imagine for a moment if the caller was a spy for, oh, Russia, North Korea, Iran or any other country intent on doing harm to the United States.