Worldly perfection normally would allow folks like me to blow off the rants of a rapper-turned-wise ass as just that, meaningless rants.

Except that this world ain’t perfect. So, when a rapper like Kanye West goes on a podcast with Alex Jones — the notorious conspiracy theorist — and declares that Adolf Hitler had redeeming qualities, well, you gotta take this clown a lot more seriously than he deserves.

But … this is the same idiot who dined with Donald Trump and brought along Holocaust denier/anti-Semite/white nationalist Nick Fuentes.

Trump still declines to condemn the rubbish that comes from West’s pie hole, or the moronic rants of Fuentes. He offered some kind of lame “rationale” for breaking bread with these two freaks by declaring that neither of them said anything “anti-Semitic” while they were in Trump’s presence.

It’s also frightening to think that a former president of the United States would keep the company he keeps.

Donald Trump’s repeated efforts to feign ignorance about notorious and infamous political characters offends anyone with half a noodle in their noggin who knows a blatant lie when they hear it.

Trump is lying once again, I believe with all my soul, when he professes to “not know Nick Fuentes” — the avowed white supremacist, anti-Semite and Holocaust denier.

It reminds me of how Trump claimed to “not know a thing” about David Duke, the nationally known Ku Klux Klan grand dragon who endorsed Trump’s presidential candidacy in 2016.

He lied then, too.

Or when he equated Klansmen and Nazis with counterprotester in Charlottesville, Va., in 2017. Remember when he told of “good people, on both sides” of that bloody riot? There are no “good” Klansmen or Nazis — period!

Fuentes broke bread with Trump and Kanye West, the rapper who’s also spoken ill of Jewish people, the other day in Mar-a-Lago, Fla. This latest example of Trump playing only to his racist base of supporters provides without question a hideous example of this individual’s unfitness for public office. 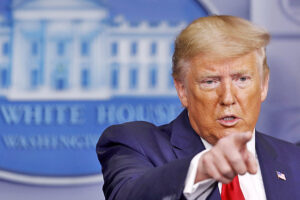 Is it too early to begin assessing Donald John Trump’s place in U.S. presidential history?

I don’t believe it is. I believe historians already are hard at work seeking to get their arms around an individual who won an election by securing enough Electoral College votes to defeat a highly qualified, eminently more sophisticated opponent in 2016.

He then began the lying campaign from the get-go, saying out loud he won by a “historic landslide,” which of course was nothing of the sort.

It got a whole lot worse from there.

In many respects, the Trump history is still being forged. Its final form will come when all the prosecutors are done examining whether he committed crimes while inciting the assault on our government, or when he took classified documents from the White House to his Florida estate, or whether he is guilty of tax fraud in the operation of his company, or whether he bullied Georgia election officials to “find” votes that would swing that state into his favor during the 2020 election.

Then again, even those myriad probes are enough to include in Trump’s legacy as a twice-impeached president of the United States.

I keep asking myself what Trump will do with his post-presidential life. Will there ever be a Trump museum and presidential library? Will he ever devote himself to any noble cause, or will he remain as fixated on his own aggrandizement as he was before he became a politician? How will this individual ever be involved with events that include his predecessors or his successors?

It might take a future generation of historians to craft an image of Donald Trump’s time at the pinnacle of political power that matches reality. The beginning chapters, though, surely can be drafted.

No matter what the cultists who adhere to what passes as doctrine in the mind of Donald Trump might say, the first draft will be anything but glorious.

Donald J. Trump needs yet another lesson in civics … so here goes.

The ex-POTUS reacted quite predictably to a U.S. Supreme Court ruling that cleared the way for the House Ways and Committee to see his tax returns, the ones he withheld from public view for the past six years.

He said the court’s decision was “no surprise” that it “ruled against me.” Wait a second, Donald.

The court didn’t rule against you. It studied the law and determined that there was no legal basis to keep the records away from Congress. It wasn’t a decision based on any antipathy toward the ex-president.

I should remind The Donald that three of the court justices were nominated by him and that the 6-3 conservative majority on the court is presumed to look favorably on right-wing arguments that come before the panel.

It’s about the law, Donald, not about you.

Now it’s William Barr who has incurred the wrath of the man who selected him to be — ostensibly, at least — the nation’s attorney general.

The reality, though, was that Barr turned out to be a Donald Trump loyalist who misinterpreted the Robert Mueller special counsel findings on whether Trump colluded with Russians in 2016. There were many other times when Barr acted more like Trump’s lawyer than the nation’s chief law enforcer.

Now we hear from Barr that Trump is likely to be indicted for allegedly violating the Presidential Records Act and the Espionage Act by pilfering classified documents, taking them from the White House and storing them at his home in Florida.

Trump is angry, man. He is outraged. How can Barr say those things? He can say them because he is pretty good lawyer who likely has a good sense of what prosecutors know.

There have been a long and growing list of former Trump loyalists who now are speaking out — belatedly — about the hideous conduct of the 45th POTUS.

Merrick Garland’s decision to appoint a special counsel to lead the investigation into the 1/6 insurrection and the pilfering of classified documents by the former POTUS is looking better all the time.

The counsel is John L. “Jack” Smith, a career prosecutor, a registered independent and a no-nonsense public servant. The attorney general saw a potential conflict of interest in prosecuting Donald J. Trump while the former president campaigns for the office. The conflict would arrive if Trump gets nominated by Republicans and runs against Joe Biden, the president who selected Garland to run the Justice Department.

So he’s backing away from active participation. Why is that such a bad thing?

I see few downsides to it. Smith will get to work immediately and will guide the prosecutorial team already assembled to its conclusion in both of these cases.

My hunch follows the lead already expressed, which is that Smith will get to the end of it all in fairly short order. Then we’ll get a decision on whether Donald Trump is indicted for the crimes I believe he committed.

I am going to make a solemn pledge and I expect y’all to hold me to it.

I hereby intend to ignore Donald J. Trump’s “candidacy” for president of the United States. His proclamations on the campaign trail will mean not a damn thing to me. I do not believe a single word that flies out of his mouth.

Now, I will keep both eyes on his legal trouble. I will have plenty to say on those issues as they unfold. His alleged candidacy? Not a chance.

There might be an occasion where Trump says something I consider defamatory. I’ll weigh my options then, take them on a case-by-case basis.

He won’t have an original idea to offer. He won’t offer a view for the future. He will continue to litigate The Big Lie involving alleged “widespread voter fraud” and the 2020 election.

There is no point in commenting on any of that.

So there. You may take that to the bank. 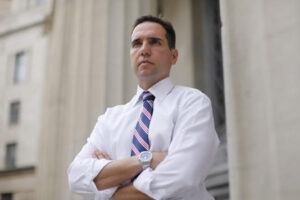 Attorney General Merrick Garland no doubt saw this moment coming a while ago, yet he waited until today to announce that he is appointing a special counsel to examine two key aspects of the criminality demonstrated by Donald J. Trump.

The special counsel is a young man named Jack Smith, a career prosecutor and someone known to be a no-nonsense battler for the truth.

What did the AG see happening? It was the prospect that Trump would declare his candidacy for president in 2024. He likely figured the twice-impeached, disgraced and utterly unfit Trump would make another go at the office of POTUS.

OK, I am going to endorse Merrick Garland’s decision to step away formally from the probes into the 1/6 insurrection and the Mar-a-Lago document theft.

Look at it this way. Garland and the Department of Justice have done a lot of the spade work already. They have uncovered mountains of evidence that Trump incited the attack on the Capitol on 1/6 and — more specifically — that he has obstructed justice in the recovery of documents Trump took with him to his estate when he left the White House … hopefully for the final time, ever!

I know what some of you might be thinking. We’ve been down this “special counsel road” already. Robert Mueller took the job to probe whether there was collusion between Trump and them Russians. He didn’t indict anyone.

Do I want any more delay in this search for accountability? Of course not! Nor do I necessarily believe there will be a delay. AG Garland has promised that the counsel will move expeditiously. Let’s hope he hits the ground at a full gallop.

The bottom line, though, is that Merrick Garland envisioned a potential conflict of interest were he to remain in charge of these two probes. It remains a possibility — although I consider it a remote one — that Trump might end up running for president against the man who selected Garland to lead DOJ.

Accordingly, I believe Garland’s decision was the correct one.

Now, it becomes imperative for the special counsel to get busy … as in right now!

You’ll have to excuse me for refusing to push any panic buttons. He will not be elected POTUS in November 2024. He might not even be nominated by the Republican Party. Indeed, he might pull out of the race once the criminal indictments pour in.

He garnered fewer votes than Hillary Clinton in 2016 but was elected on the basis of the Electoral College victory he scored. I accept that he won. Trump collected 7 million fewer votes than Joe Biden in 2020 and lost his re-election. I embraced that outcome.

What happens now? Beats me.

I do know this: The ex-POTUS is going to make an ass of himself.

Kari Lake has just joined the roster of fellow deniers of the 2020 presidential election.

That is, she’s now a loser, having been defeated for the Arizona governor’s office by Democrat Katie Hobbs, who served as Arizona secretary of state and presided over the election that helped send Joe Biden to the White House.

Oh, did I mention that Lake had been endorsed by the man President Biden defeated in 2020, Donald John Trump? Well, you knew that.

Lake has been ardent denier of the truth, which is that Biden won a free, fair and legal election. Lake has been among the Big Liars who have alleged widespread voter fraud that did not exist.

Well, may this defeat signal the end of her presence on the national political scene … along with all the other liars.