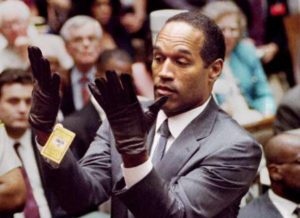 Today marks 25 years since the deaths of two individuals who became linked inextricably with a former football great, a member of the Pro Football Hall of Fame and someone who most Americans believe got away with a heinous crime.

O.J. Simpson was acquitted later of murdering his former wife Nicole Brown Simpson and her friend Ron Goldman in Nicole’s home in Los Angeles. O.J. was implicated in the deaths, given his past history of spousal abuse and, oh yeah, the physical evidence that the cops recovered from the crime scene.

Simpson hired a crack legal team led by Johnnie Cochran, and including Robert Shapiro, F. Lee Bailey and the father of those Kardashian girls, Robert Kardashian.

They cast sufficient doubt on the police investigation into the murder to score an acquittal. O.J. walked free and then made this pledge: that he would “spend the rest of my life” looking for the “real killer or killers of Nicole and Ron.”

Oh, but now he says he doesn’t want to “dwell on the negative.” He wants to move with his grown children. He lives in Las Vegas and spends his days playing golf.

I guess I should add that he was found “liable” for Nicole and Ron’s death in a civil suit and ordered to pay $33 million. The level of proof in the civil case was far less demanding that the criminal case. Still, that civil jury said in effect, dare I declare it, that O.J. killed his wife and friend.

What about the pledge to find the killers, O.J.? Are you still on the hunt?

Christine Brennan wrote in USA Today that the real focus as we look back on this day should be on the Goldman family, who lost a son and a brother to, um, someone.

She urges us to devote our lives to creating what Simpson himself called a “no negative zone.” Not a bad idea at all.

But if hell freezes over and O.J. Simpson finds the real killers, I trust he’ll let us know.