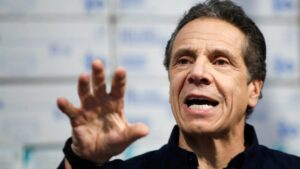 I feel fairly confident in asserting that New York Gov. Andrew Cuomo, a political heir and son of a prominent East Coast dynasty, is likely finished as a politician.

The attorney general vowed to get to the bottom of it and today she asserted that Gov. Cuomo did what the women have alleged.

Why does this matter to me, your friendly blogger way down yonder in Texas — a good distance from Albany, NY.? Because the New York governor has been a national figure since before he was elected to his current office. He was born the son of Mario Cuomo, the fabulous orator and former New York governor. He served in President Clinton’s Cabinet as housing secretary.

During the current pandemic, Cuomo emerged as an eloquent spokesman for the way his state was handling the crisis.

Now we have this. The rest of it, all the good stuff? We might as flush it away. See ya later, governor.

One thought on “It’s over, Gov. Cuomo”