Amarillo city commissioners are about to welcome in the new fiscal year (on Thursday) with a tax rate that stays essentially the same.

Homeowners — such as me — will be happy that their city tax rate won’t increase this year. But what about the following year, or the year after that?

The city has been rightfully proud of its low tax rate. But the city was thinking of increasing that rate just a little to pay for more police officers and municipal court staff. Three members of the City Commission at first favored such an increase, which would have paid for seemingly politically popular programs. Who in their right mind in the Panhandle opposes more money for the local criminal justice system? Then they backed off. They don’t want to increase taxes during this down economic time. I get that.

But another government entity once held to the same hold-the-line-no-matter-what view of tax policy. Randall County resisted, and resisted and resisted increasing taxes. Then the bill came due about a decade ago to pay for infrastructure improvements required by the growth in the county. County commissioners raised taxes beyond the 8 percent rollback limit. Taxpayers revolted, called for a rollback election — and won. The tax rate receded, reducing the revenue flow, which forced the county to cut services.

Might the city be facing a similar situation if it keeps the lid on its own tax rate?

The city might be able to pay for additional police and court staff if sales revenue picks up sufficiently. Commissioners no doubt are hoping that the economy picks up steam — in a major hurry.

The Amarillo medical community is keeping us all on our toes.

The abrupt and immediate “resignation,” announced today, of Baptist St. Anthony’s head man John Hicks has medical complex observers buzzing. Hicks, the face and voice of BSA since its creation in 1996, had been a major player in Amarillo, becoming a significant presence on a number of boards and commissions; his most notable presence has been as a member of the Amarillo College Board of Regents. Hicks’ future, of course, remains notably unsettled at the moment.

But this is just the latest in a string of big news.

BSA and Northwest Texas Hospital pulled out of the Harrington Regional Medical Center Inc.; a group of former Amarillo Area Foundation presidents have taken HRMCI to task over its selling of land at the medical complex; NWTH has just announced plans to sell its ambulance service.

Overlaying all this is the intense national debate over health care reform and what it means for medical providers and consumers at communities all across the country — and surely includes Amarillo and the rest of the Panhandle.

Hang on tightly. The ride at the medical center is bound to get a little bumpy. 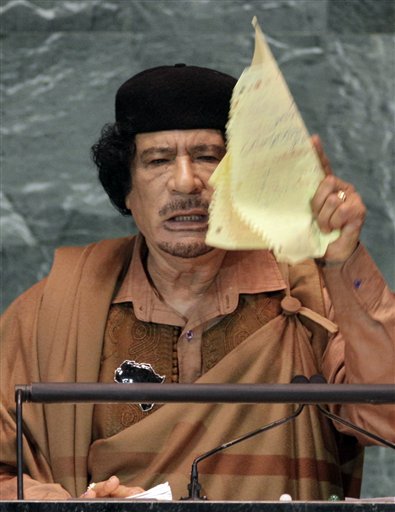 He showed up at the United Nations dressed like a Bedouin shepherd. It took him 15 minutes to take the podium after being introduced — as the “king of kings” no less. Then he launched into a 98-minute “speech” that covered everything from the usual rants about Israel to suggesting a probe into President Kennedy’s assassination. (Hint, Mr. Dictator/Despot: been there, done that.)

I was struck by his appearance, which is that, to my eyes, looked like he’d been rode hard and put up wet. One of my colleagues, City Editor Dave Warren, said Gadhafi looked like he’d had a bad makeover. Another colleague, columnist Jon Mark Beilue, said the Libyan strongman looked like a Saturday Night Live parody of himself.

I don’t as a rule make fun of people’s looks, but when you’re a known sponsor of international terrorism — who hugged a convicted terrorist upon his return home recently after being released from a Scottish prison — then I choose to make an exception. 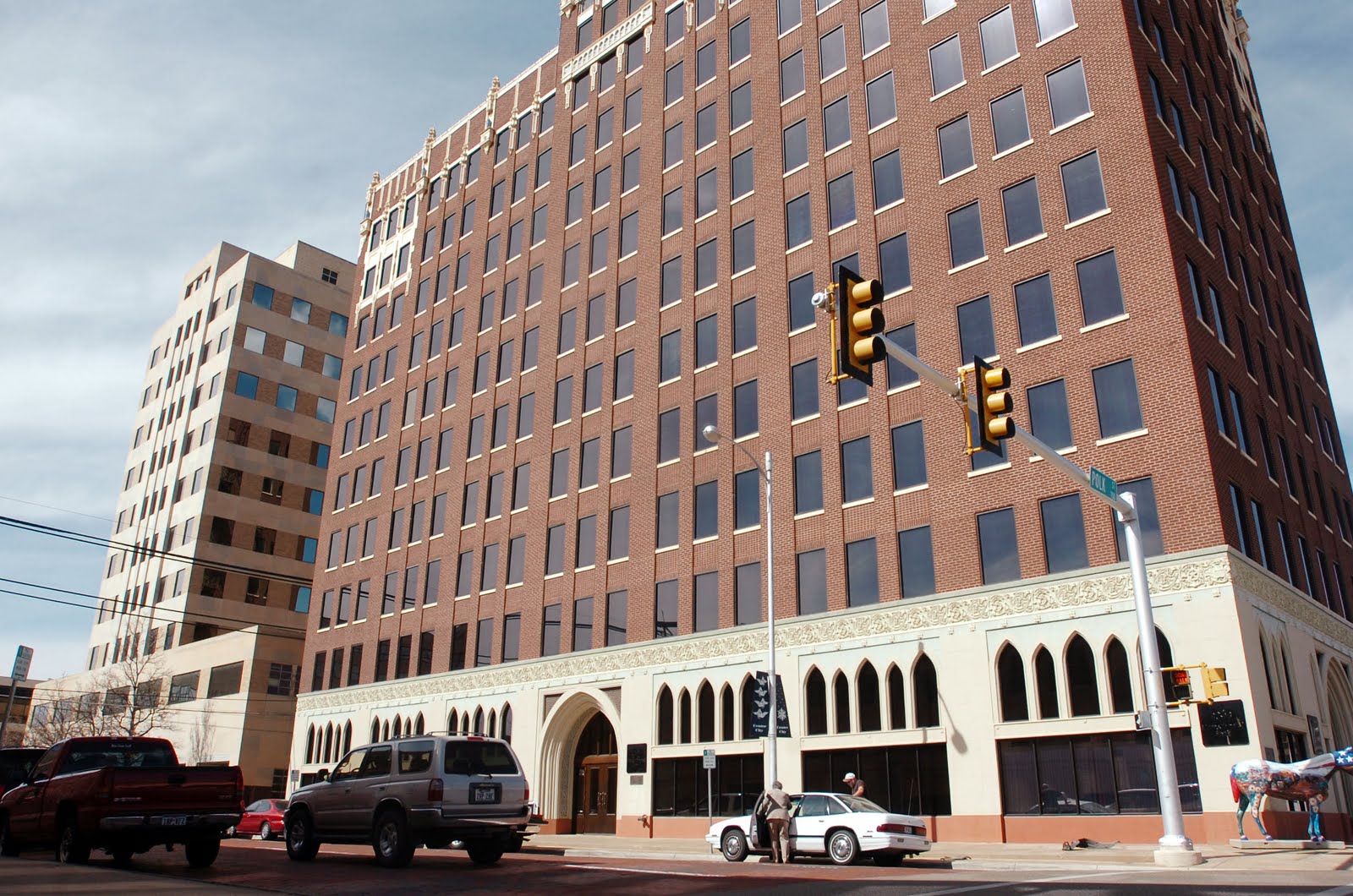 Walking back from lunch Wednesday along Polk Street, I shot a glance at the Fisk Building.
I darted across the street and pressed my face against a grimy window and saw what I had hoped to see: construction, and lots of it, ongoing in the one-time bank building.
There’s a sign hanging on a parking garage next to the structure declaring that the new Marriott hotel is scheduled to open on the site next summer. What a grand step forward in the effort to revive downtown.
Crews have all but gutted the ground floor of the Fisk. The plan is to turn the historic structure into a downtown business hotel, along with office space.
It’s just one step, but it’s more than a small one. And it’s happening in one of downtown’s more attractive structures. For my money, the Fisk ranks right up there with the Santa Fe Building as an aesthetic gem.
My sincere hope is that the work on the Fisk doesn’t stall as it has on the Barfield Building a few blocks away. That promotional sign on the parking garage surely will keep the momentum moving forward — correct?
Tweet
Tweet

This just in: Police in Irving have nabbed Joshua Duane Barnes, the guy who escaped this past weekend from state prison authorities’ custody in Galveston. This was his third escape in about a year from law enforcement’s supposedly firm grip; his two earlier attempts occurred in Amarillo.

Authorities say Barnes will be sent to a maximum-security prison.

Maybe now he’ll be put on the shortest leash possible.

Meanwhile, Texas Department of Criminal Justice officials have some explaining to do.

Taking a public relations hit never is easy. But the Texas Department of Criminal Justice could take a lesson from Randall County Sheriff Joel Richardson on how to handle a highly public embarrassment.

Joshua Barnes is on the lam after escaping this week from a prison hospital in Galveston. It’s the third time he’s wiggled free from authorities’ grasp; the first two times occurred in Potter County. You’d think the state would keep an extra careful eye on this guy, given his history of escape. Barnes is serving time in TDCJ on a variety of felony convictions.

Mark Edward Hanson escaped in late 2005 from the Randall County jail. He pried, pounded and kicked his way out of a cell, got to the roof of the jail, tossed a blanket over a barbed-wire fence and climbed over the fence; he hitched a ride into Amarillo with a couple of guys. Police arrested the guy a few hours later.

What was Richardson’s response? He took the blame fully. The sheriff said it was no one’s fault but his own. He manned up. Richardson said the inmate should have been put in a hardened cell — with solid cement walls and ceiling. He already had a violent criminal record and had attacked two corrections officers already. “If anyone is to blame, it’s me,” Richardson said at the time.

I’m not hearing that kind of accountability — so far — from TDCJ in connection with Barnes’ latest escape.

And, yes, this story has gone national. A lot of Americans are asking: How did this happen — again?

Defenders of President Obama are taking an interesting course as they seek to single out the motives of the president’s critics.

They suggest that the anti-Obama crowd is questioning his “legitimacy” as president.

We’ve been down this road before in recent political history, more or less.

Those who gnashed their teeth at George W. Bush’s election in 2000 questioned whether Dubya’s presidency was legit. He eventually was seated after a 5-4 vote by the U.S. Supreme Court to end the recount of ballots in Florida. Thus, Bush was elected by a single vote — on the high court. And that single vote came from a justice appointed by a Republican president, belonging to the same party as Bush.

Then we have the two elections of Bill Clinton. In 1992, Clinton was elected with 43 percent of the vote. In 1996, he was re-elected with a 49-percent plurality. “He wasn’t elected by a majority!” came the cries of the Clinton-haters. Those folks forgot, apparently, that Richard Nixon was elected in 1968 with a similar 43-percent plurality, but one didn’t hear those who opposed Nixon bring up his failure to obtain a majority. Nixon and Clinton were denied majorities by the presence of strong third-party candidates.

But here’s the deal. The U.S. Constitution doesn’t require a president to be elected by a majority. A simple plurality gets the job done, just as it does in Texas. Gov. Rick Perry won re-election in 2006, you’ll recall, with just 39 percent of the total vote. And Bush’s first election in 2000 was done in accordance with constitutional provisions.

President Obama’s popular vote margin of victory was significantly greater in 2008 than President Bush’s was in 2004 — and his Electoral College margin (365-173) was close to the totals run up by Bill Clinton in 1992 and 1996.

Obama’s presidency is legit, all right. So, let’s stop this talk of whether the president belongs in office. He does.

But I’m guessing that the great escape artist, Houdini, had nothing on this other dude, Barnes.

Joshua Barnes escaped corrections authorities — for the third time — over the weekend. He had wiggled his way out of Potter County’s grasp before being sent to the state corrections system on a variety of felony convictions in both Potter and Randall counties.

Barnes was being treated in a Galveston prison hospital for injuries suffered in a fight at the Ferguson Unit north of Huntsville. Texas corrections officials say he apparently broke through the drywall in his hospital room, got through a window and used a couple of sheets to lower himself to a roof. Then he was gone.

Police urge the rest of us to look for someone wearing hospital garb — and sporting shiners under both eyes as well as other facial injuries. You’d think he wouldn’t be that hard to spot. 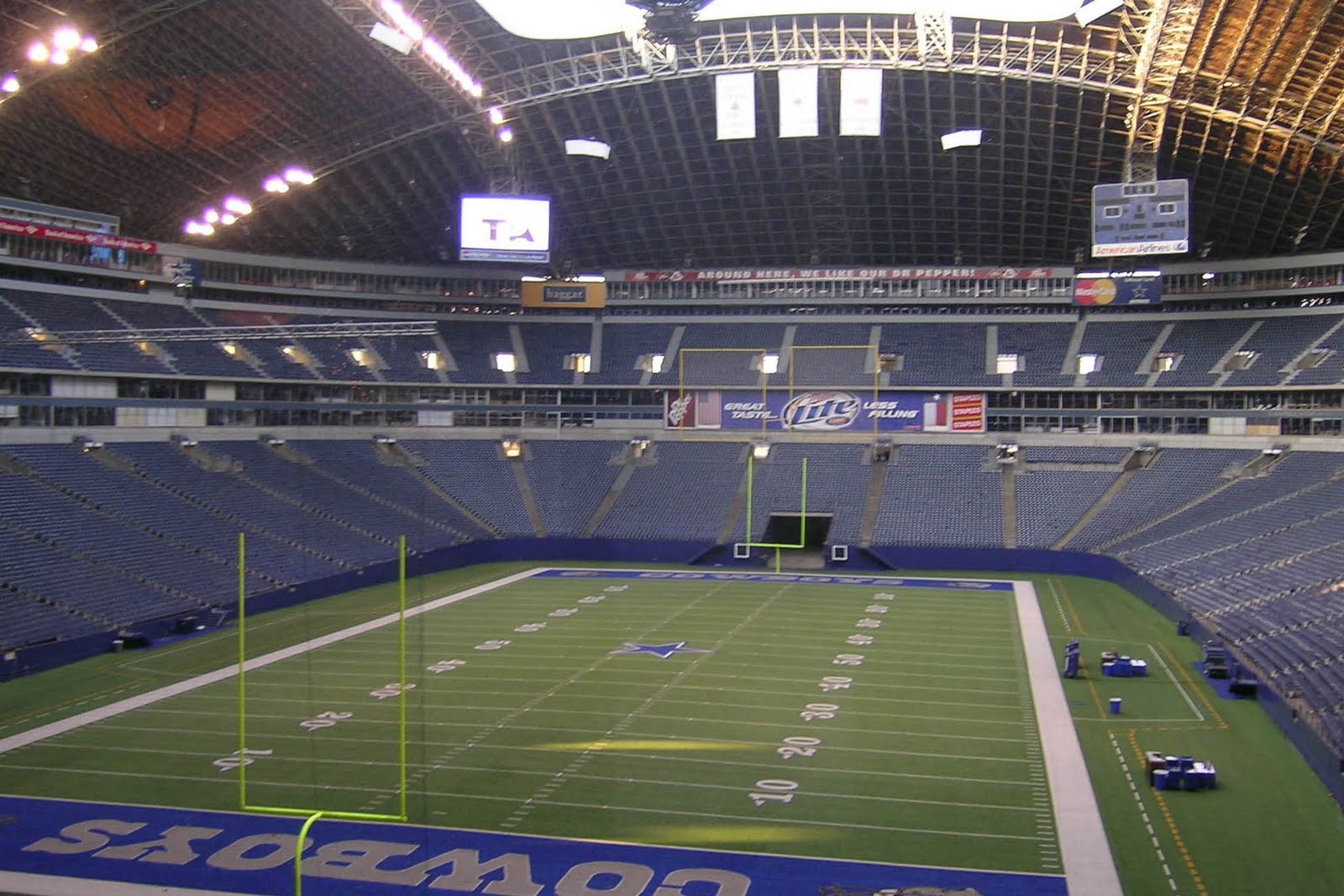 Rather than letting his coach, his players and his front-office staff do the talking, Jones does it himself. Didn’t he slap a gag order on Dallas Cowboys head football coach Wade Phillips a season or two ago?
He’s the general manager and the “voice” of the Cowboys.
Now he has erected this monstrous new stadium in Arlington, which actually is closer to Fort Worth than it is to Dallas. A good friend of mine, who used to work for the Fort Worth Star-Telegram, couldn’t bring himself to refer to the “Dallas Cowboys”; he called them the “Irving Cowboys,” in tribute to the location of the team’s prior stadium.
I hope I’m wrong, but I am getting this nagging feeling in my gut that before too long, Jones is going to unveil a huge statue of himself in front of the stadium — just to remind everyone who’s responsible for this latest testament to a man who has everything.
Tweet
Tweet

It’s maddening to listen to a loony despot pop off, issuing statements of the most outrageous nature.

Iran’s Mahmoud Ahmadinejad has done it … again. He told an NBC interviewer that the Holocaust is a fraud, a hoax, a lie perpetrated by Israelis who use it as a pretext to occupy Palestinian territory.

He called the most documented event in human history a fantasy.

Just how offensive can this man get?

I had the high honor of touring Israel during most of May and a good bit of June this year. I listened to countless tales of the misery inflicted by the Nazi murderers in Europe who exterminated 6 million Jews prior to and during World War II. Israel’s very existence as a state is due largely as a result of that horror. And yet, the Iranian lunatic — who’s never been to Israel — says the Holocaust never happened?

Those piles of corpses discovered by American, British, Canadian and Russian forces fighting their way to Berlin were a figment of someone’s imagination?

And to think that this madman just might acquire nuclear weapons.