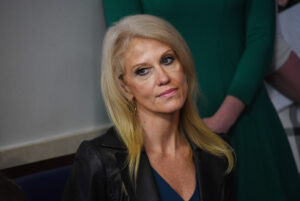 Kellyanne Conway might be the worst liar since, oh, perhaps Donald John Trump.

The president’s senior policy adviser made some talk show appearances today and got asked about Trump’s decision to retweet that ghastly rumor that Bill and/or Hillary Clinton had a hand in killing financier Jeffrey Epstein, who reportedly hanged himself in that Manhattan jail cell; Epstein was awaiting trial on charges that he engaged in sex trafficking of young girls.

Conway said the president merely wants to “investigate everything” in connection with the death of his former friend, Epstein — who also happened to be pals at one time with the former president, Bill Clinton.

So, Conway would have us believe that to further the search for the whole truth he chose to defame the former president and perhaps his wife — who happened to be Trump’s 2016 presidential election opponent — by spreading that ghastly rumor of alleged complicity in the death of Epstein.

Who in the world does Conway think she’s talking to? I mean, does she think all Americans are rubes and blind loyalists like so many of those who comprise the president’s fervent “base” of voters?

Let me give you my spin on it.

Donald Trump deals in innuendo. He doesn’t possess the necessary inquisitiveness that seeks the truth into anything. He has traded for longer than he has been in political life on stabbing others in the back.

Was he looking for the truth when he suggested that Sen. Ted Cruz’s father might have been complicit in President Kennedy’s murder? Or when he fomented the lie that Barack Obama was not constitutionally qualified to run for president of the United States?

This individual is a liar and a fraud. He has surrounded himself with fellow liars and frauds. That includes Kellyanne Conway.