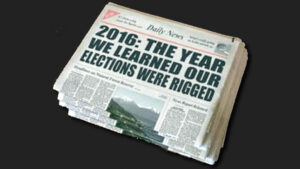 Mr. President, I lost count of the number of times you said that the 2016 election would be “rigged” if Hillary Rodham Clinton were to win the presidency.

I remember how it became a sort of campaign stump speech mantra. You kept hammering away at what you said would be a “rigged” result stemming from what you said were “Crooked Hillary’s” instincts. I recall how you said the Democratic Party rigged its nomination outcome to ensure Clinton would carry the party banner against you over Bernie Sanders.

Well, your victory surprised a lot of us, Mr. President.

But then came the reports of Russian hackers interfering in our electoral system. I accept that Robert Mueller’s investigation said you and your campaign didn’t conspire to collude with the Russians.

However, his insistence that the Russian interfered on your behalf brings to mind the question: Was the 2016 election “rigged” to benefit you, Mr. President, over your opponent?

I once thought out loud that the Russian attack didn’t have a discernible impact on the election result. I have changed my mind.