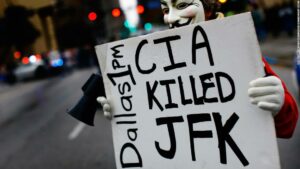 They will never die. Not ever. They will live far beyond all of our time on Earth. They’ll outlive my sons’ time, too.

What are “they”? Conspiracy theories! That’s what I’m talkin’ about!

Jeffrey Epstein’s death in the Manhattan, New York City jail cell has spawned ’em by the dozens. Already! You see, Epstein was supposed to stand trial after he pleaded not guilty to charges that he peddled young girls for sex.

Epstein had some high-powered friends. Two of them became “former friends” for reasons that aren’t exactly clear. Their names are Bill Clinton and Donald Trump.

Now that Epstein is dead, the conspiracists have developed some hideous notions that Clinton might have been involved in killing him. Others have suggested Trump played a role in murdering Epstein.

These theories are going to take root. Their roots will run deep.

And so they have gone. They’ll go on forever.

Indeed, conspiracy theories already exist involving former President Clinton. They involve bogus allegations of people with dirt on the president and his wife ending up dead. Indeed, those phony rumors are thought to be the source of the latest defamatory rumors surrounding the death of the miserable pedophile Jeffrey Epstein.

Are there questions that need answering? Surely, yes.

However, I believe I can predict today that no matter how thorough the explanation, or how much evidence they produce to back whatever conclusions they draw about Epstein’s death, there will be those who will purport to disbelieve what they see and hear.

They will trade on conspiracy theories. What’s worse is that there will be those who are willing to take the bait.