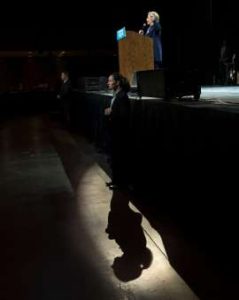 Her problem? She cannot say it out loud. The Democratic nominee for president of the United States must rely on surrogates to express their outrage on her behalf.

She happens to have a couple of powerful surrogates: President Barack H. Obama and his wife, Michelle, who have done a masterful job of peeling the bark off the Republican presidential nominee.

Hillary Clinton’s own history — as well as the history of her husband — compel her to remain mum on the subject of those ghastly Trump comments we all heard the other day aboard that “Access Hollywood” bus in 2005.

As the New York Times has reported: “Though Hillary Clinton has stood at the center of feminist debates for more than two decades, she has also been an imperfect messenger for the feminist cause. That has never been more true than now, as her old missteps and her husband’s history have effectively paralyzed her during a moment of widespread outrage.”

And the outrage hasn’t let up since the video and audio recordings were released to the public.

As for whether any of this damages Hillary Clinton’s political standing, I happen to believe it will not.

Her tactic so far has been to change the subject when the talk turns to Trump’s statements about attempting to seduce a married woman, or how his “star” status allows him to grab women in their private areas, or allows him to kiss them aggressively without their consent.

The two of them have one more joint appearance to endure before voters have their final say. It will occur, interestingly, in Las Vegas, Nev., where Trump has some significant business dealing and where — one might presume — he has engaged in some of his untoward behavior with women.

Will any of this come up when the event opens? Uhhh, let me think for a second … yes, it will.

Do not look for Clinton to go there. She’ll likely just let Trump rant like a madman over the former president’s misbehavior.

From where I will be sitting while this event occurs, that will look like a good call.

Then she’ll likely sic Barack and Michelle Obama on him.