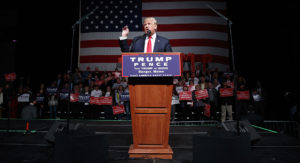 It’s been said many times by historians that the United States is the world’s model for peaceful transition of power from president to president, particularly in times of crisis and tragedy.

* 1963: John F. Kennedy was gunned down and Lyndon Johnson took the oath of office shortly after doctors announced the death of the president. We didn’t skip a beat.

* 1974: Richard Nixon resigned from office in the midst of a profound constitutional crisis and Gerald Ford became president, declaring “Our long national nightmare is over.” The beat went on.

* 2000: George W. Bush won election by the narrowest margin imaginable over Al Gore. The Supreme Court settled it in accordance with constitutional law. The government continued to function.

Three earlier presidents — Abraham Lincoln, James Garfield and William McKinley — were murdered while they were in office; their vice presidents took power, also without incident.

That history of relative tranquility is being threatened in 2016 by an ominous drumbeat from Republican nominee Donald J. Trump, who keeps harping on a “rigged election” determining who will become the next president. He continues to foment anger among his supporters who talk openly about “revolt” against the system if — and/or when — their guy loses to Democratic nominee Hillary Rodham Clinton.

This is nasty stuff, man.

According to Politico: “Donald Trump is laying the groundwork to lose on Nov. 8, refuse to concede the election, and teeter the country into an unprecedented crisis of faith in government. Republicans and Democrats, in Washington and beyond, fear that the aftermath of the 2016 election will create a festering infection in the already deep and lasting wound that the campaign is leaving on America.”

On top of what he’s been saying about “rigging” the election, he asserts that Clinton should be thrown in jail. Due process? Presumption of innocence? Forget about it!

There’s this, also, from Politico: “And, they say, only Republican leaders who speak up will have any chance of stopping it.”

There needs to be a dialing back of this crackpot rhetoric. Trump likely will ignore all pleas to restore some semblance of reason. After all, he said recently he’s been “unshackled” by House Speaker Paul Ryan’s declaration that he no longer can “defend” Trump over the accusations that he assaulted women sexually.

Trump’s foes have declared him to be a demagogue who presents a serious “danger” to the United States of America.

Trump is proving them to be absolutely correct.