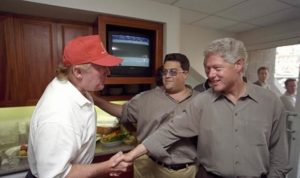 This is too good to keep to myself.

OK, it’s already out there in the public domain, but I have to share a bit of it here. It involves something Donald J. Trump told columnist/TV commentator Chris Matthews in 1998.

It comes from the Guardian in Australia. A friend of mine sent it to me overnight in an e-mail. To wit:

“During a 1998 appearance on CNBC with host Chris Matthews, current Republican presidential nominee and then simple tycoon Donald Trump declared that if Bill Clinton’s personal peccadillos were enough to prompt impeachment proceedings, his own history with women was more than sufficient to keep him out of the White House.

“Trump was still confident that ‘his women’ would be better received by the American public. ‘Yeah. They might like my women better, too, you know?'”

Hmm. Well, time will tell — probably around, oh, Nov. 8 — whether Americans like Trump’s women better. My strong hunch tells me the decision voters make — once they get past his utter ignorance of the substance of anything at all — will also be based on Trump’s “own history with women.”