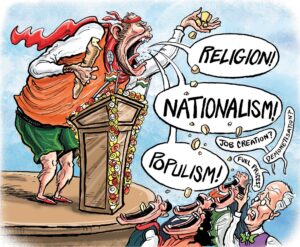 The craziness of the current political climate is manifesting itself daily. Everywhere I look I see evidence of families being torn apart. Of friendships being lost. Of professional relationships being severed.

Why? Because of politics.

I see evidence of all this playing out near and far from our home in North Texas. I hear about extended family members gnashing their teeth over whether to get vaccinated against the virus that is killing Americans to this very day. I hear about other family members not speaking to each other. Again, it has to do with vaccines.

I had more than a glimmer of hope that we could return to some semblance of normal disagreement when the 45th POTUS departed the White House for the final time this past January. Silly me. It ain’t happening … at least not yet.

I heard someone say the other day that even though the 45th POTUS is gone, the political cult he inspires remains in play. I believe POTUS 45 will stay gone. I also fear the cult that bears his name will continue to be a force in driving the political dialogue long after he has, um … flown away.

It will show itself in damaged relationships. Whether it’s about vaccines, voting rights, abortion or any combination of hot-button issues, we are seeing a decay in the political climate.

It is stinky rotten and it is nowhere near the kind of world I want to leave for my sons or their families.

A former Republican presidential nominee, Mitt Romney, said near the end of the 2012 campaign that “there’s more to life than politics.” Indeed. He was right. If only we could rediscover the big, beautiful world on which we should be building our relationships. 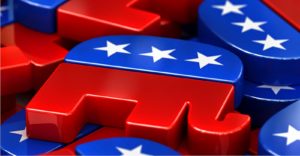 It pains me to say this, but here goes anyway.

What has become of the Republican Party — a once-great political organization that has been hijacked by cultists — makes me miss the Grand Old Party we all used to know.

I say that as a card-carrying, true-blue good-government progressive who tends to favor Democratic Party policies over those proposed by the GOP. I have acknowledged on this blog that every presidential vote I have cast since 1972 has gone to Democrats … although the 1976 contest between President Ford and Jimmy Carter gave me pause to consider voting for the GOP incumbent.

What used to be normal among Republicans has become abnormal. GOP officeholders take the same oath of office as their Democratic colleagues. They swear to protect and defend the Constitution. They merely approach their defense and protection differently than Democrats. I accept those differences.

These days, that loyalty has shifted to an individual, to the former president who alleges vote fraud where it doesn’t exist. They stand with him and his idiocy. They ignore the actual oath they took to defend the Constitution. They call themselves “patriots” but their actions are far from patriotic.

The future of the Republican Party that I used to know remains clouded. I don’t know where it goes from here. Or how it rebuilds itself into a political party that can speak intelligently — as it used to do — about the differences it has with Democrats.

These days we see seasoned politicians giving way to a former president who cannot speak intelligently on the issues that matter. He blathers and bloviates. He spreads The Big Lie about vote fraud. The former POTUS cannot parse a single policy with the kind of clarity we used to hear from his fellow Republicans.

His base loves him nonetheless. They have taken the Republican Party hostage. Will the party leadership shed their bondage and escape? For the sake of sane and reasonable public discourse and debate, it must. 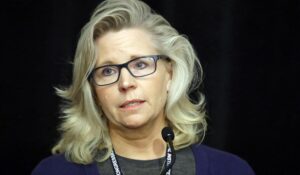 Has it really come down to this?

The Republican congressional caucus might be on the verge of purging its leadership of a true-blue conservative lawmaker with impeccable party credentials.

Why? Because she voted to impeach a president who incited a deadly riot on Jan. 6 and because she stands on certain principles that all patriotic Americans ought to follow: that no one is above the law.

Rep. Liz Cheney, the daughter of former Vice President Dick Cheney and No. 3 in the GOP caucus leadership pecking order, might be voted out of her post because she believes that Donald Trump’s fomenting of the Big Lie about the 2020 election presents a danger to our democratic system of government.

And for that the GOP might send her to the back bench?

That is unbelievable, except that is what has become of a once-great political party.

The GOP has become a cult of personality beholden to someone who had no business being elected president of the United States in the first place. When he was elected in 2016, Donald Trump began the systematic dismantling of every political norm he could grab.

Along the way, he formed the astonishing cult of believers who adhere only to the whims and machinations of one man at the expense of good governance.

That individual has refused to this day to accept the fact that he lost an election and has taken the cult following to dangerous levels of blind fealty. It is a sight to behold.

I am not a fan of Rep. Cheney. Except for this notion: She is standing for a principle that I used to think transcended the partisan political divide. The principle is the rule of law.

Donald Trump incited an insurrection. The House of Reps impeached a second time for it. Cheney was one of 10 Republican House members to join their Democratic colleagues in holding Trump accountable for his incitement.

For that she is being punished? Because she stands for the belief that our Constitution and our democratic system of government — which she swore to protect — are more important than the political standing of one man?