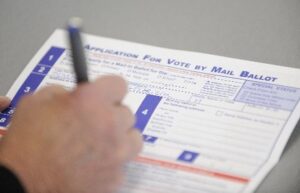 There’s a bit of good news to report from the latest round of midterm primary election results, some of which haven’t yet been declared official by various states.

It is that a number of the certifiable nut cases endorsed by Donald J. Trump have either won their Republican primary contests or are leading them with just a smattering of votes left to be counted.

Why is that good news? Why would this blogger see their seeming victories be a sign of better days?

It is because the Trumpkin wing of the GOP has clamped a stranglehold on the party. However, there exists a growing — at least I hope it is growing — pool of voters who have had it up to here with Trump’s constant yammering about The Big Lie.

The former POTUS’s cultists have glommed onto The Big Lie and are suggesting they’re going to get some payback if they manage to win the election this November against whomever they’ll face from the Democratic Party.

Democrats should — if they’re smart and have hired capable campaign staff — be able to paste the nut case label on the foreheads of their Trump cult opponents. That would be my hope.

It continues to astound me that so many Republican voters continue to insist that Trump truly was robbed of his “landslide” victory in the 2020 election by “widespread voter fraud.” The only electoral theft occurring comes from the GOP, led by its titular leader and his effort to overturn the results of the election.

But wait! Attorney General Merrick Garland well could have a whole lot to say about that effort and whether the former president has broken the law in egging on the mob of traitors who stormed the Capitol Building on 1/6.

My view? He damn sure did break the law! He needs to be prosecuted … but that’s just me.

If he is indicted and Merrick Garland can make the indictments stick, then the Trumpkins who have won their primary contests will have reached the end of their political journey.