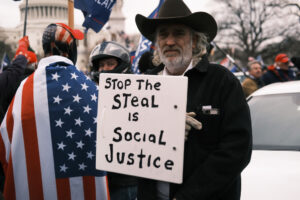 I am going to wave a white flag of surrender. I give up. I no longer can — nor will I — seek to persuade the Donald Trump cabal of cultists that they are wrong in clinging to their man’s world view … whatever the hell it is!

Truth be told, I made that decision some time ago. I don’t think I have declared my intention publicly, out loud, for all the world to hear.

I have a few critics of this blog who weigh in when I have something critical to say about their hero. As a general rule, I don’t engage them in debate.

Which brings me to my point: which is that there is no point in arguing with someone whose mind is made up, who does not listen or comprehend what I know to be the truth about their guy.

He is, as Sen. Mitt Romney of Utah — a fellow Republican — said in 2016 a “phony” and a “fraud.” He cannot tell the truth. However, the sad reality is that truth-telling doesn’t matter to the cult cabal. They buy into his lies, they repeat them and then dare the rest of us to challenge them. I can challenge the lies, but I cannot challenge the purveyors of the falsehoods.

You’ve heard the saying — or something like it — that warns against trying to talk sense into someone who is blind to any possibility that their guy suffers a fatal flaw. That, in my view, sums up the Trump cabal.

I know what you might be thinking: If I am going to accuse the Trumpkins of being blind to the truth, am I as equally blind to the views expressed on the other side of the great divide?

Not a chance. They are wrong.