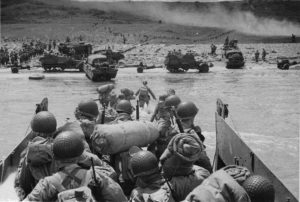 I don’t have a lengthy “bucket list” of things I want to do before I check out. I’ve lived a good and productive and eventful life full of rare experiences.

I have traveled three times to Greece, my ancestral homeland; I have been able to walk on the soil in Vietnam where I served during a long-ago war; I have spent more than a month in Israel, visiting holy sites and learning how people live so close to their mortal enemies just across borders in almost any direction.

And of course my family has filled me with great joy and pride.

But this week, watching the events commemorating the 75th year since the D-Day invasion of Europe, I have added a destination to my bucket list. I want to walk along “the beach.” I want to see where young men fought and died to save the world from tyranny.

Let me be clear: I do not have a direct familial connection to D-Day. My father was a World War II veteran, as was one of my uncles. Dad saw his combat in the Mediterranean Theater of Operations; he took part in landings at Oran, Morocco and later in Sicily and then at Salerno on the Italian mainland.

Dad faced continual bombardment from German and Italian aircraft. While manning a 50-caliber deck gun, Dad was credited with shooting down a JU-88 Luftwaffe bomber, but then had his ship sunk when an Italian torpedo bomber found its mark off the Sicilian coast.

So, no one in my family met death on the French coast on June 6, 1944. Oh, how I want to see that place nonetheless.

The ceremonies we have seen over the past few days as U.S. and French presidents have heaped praise on the men who fought to save the world. Donald Trump called these warriors the “greatest men who will ever live.” Emmanuel Macron turned to the men seated behind and said, “On behalf of my country … thank you.”

American, British and Canadian soldiers stormed ashore on five beachheads: Omaha, Utah, Gold, Sword and Juno. Their names are etched in world history as the places that changed the course of what we all hope is the last great world war.

I want to see those beaches. So help me, before I kick the bucket, I’m going to make it happen.