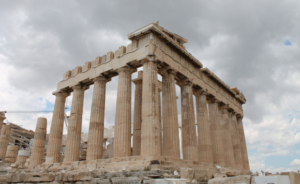 A young friend of mine has just returned from a trip spanning several days in Greece.

Butler Cain, a journalism professor at West Texas A&M University (for now) has been good enough to post many of the pictures he took of his journey on his own blog.

This group features shots taken at the Acropolis, which looms over Athens as a reminder of the greatness of the civilization it represents. The Greeks aren’t enjoying too much of that greatness these days, as their country struggles its way through a crippling recession.

But the pictures of the Acropolis — and of the Parthenon — remind me of two things.

One is that I’ve been able, along with my wife, to visit that magnificent place more than once. We went there together in 2000 and 2001; I was able to return a third time in 2003.

For those of us of Greek heritage, the sight of those antiquities sends chills throughout our body. I hope to return again.

The second reminder is of something my late father once told me when he was able to visit Athens with my grandfather — who came to the United States from Greece not long after the turn of the 20th century.

Dad told me that when he walked to the top of the Acropolis and was able to sit inside the Parthenon — which I guess you could do back in 1970 when he and my grandfather were there — he could feel his mind expand. He said something like, “I thought of things I never thought I could ponder.”

He felt smarter just being there, inside those columns erected 400-plus years before the birth of Jesus Christ.

Butler Cain is going to move on soon to another academic post in his native “sweet home Alabama.” I wish him well.

Thanks, young man, for sharing these wonderful pictures.

I feel smarter just looking at them.

Economists have hailed the era of globalism, the interconnectedness of nations.

One nation’s failures and foibles affect others, just as their triumphs do.

Greece is in trouble — again! And the world is holding its breath.

Man, it pains me to watch what’s happening to the country of my ancestors. I’ve visited the place three times: 2000, 2001 and 2003. I’ve seen the good side of the country. My wife and I have experienced its charm, swallowed up its physical magnificence, gotten a taste of its cuisine and seen first hand the antiquities left over from when it was the “cradle of western civilization.”

Greece owes billions of dollars to creditors. It must pay them back or else default. It joined the European Union, converted its currency, the drachma, to the euro, but the EU might kick Greece out. Germany, which has played a huge role in bailing the Greeks out, already is making plans for Greece’s default on the loans it has taken.

International financial markets are on edge. They’re teetering, putting retirement funds — such as mine and my wife’s — at risk.

Why is this all happening? Globalism.

Look, left to its own devices, Greece’s influence on the world shouldn’t be that impactful. It’s a small country. It’s a modern country. Its people are sophisticated and well-educated. But it comprises about 10.5 million citizens, contributing to a gross domestic product of $284 billion annually, which is chicken feed compared to, say, nearby Italy, with its $1.9 trillion GDP.

Still, the countries are linked by common currency, common trade practices and common pressures that ripple their way across Europe — and around the world.

Greece has made a mess of itself and the world might be forced to clean it up.

The push to join nations together in international trade arrangements and alliances by itself isn’t a bad thing. I remain all for it.

These alliances, though, depend on everyone doing what they must to ensure they hold together. Greece hasn’t done it. It continues to resist the austerity measures that others have imposed on it. Its left-wing government also is on the brink of collapse.

Greece is the land of my ancestors … all of them.

My mother’s parents emigrated to the United States from Turkey, but they were Greeks through and through. My father’s lineage goes back to the southern peninsula of Greece.

So, when news of Greece is bad, I ache a little bit more than I would if the news were about, say, Sweden or Poland. The Greek economy has been in the news a lot lately. And when the news is good, such as when Greece played host to the spectacular 2004 Summer Olympics, my pride swells.

My heart is gladdened just a bit with news from Reuters News Agency that the Greek economy — you’ll remember, when much of Europe was trying to bail them out with cash — has come back.

Reuters reports: “Seasonally adjusted figures showed the euro zone weakling posted three consecutive quarters of growth this year, even though it had only been expected to exit what the government has
called Greece’s ‘Great Depression’ in the third quarter.”

What has pulled the Greek economy out of the ditch? Some economists have suggested tourism has given Greece its heft. The country has discounted lodging prices and the country continues to be a magnet for tourists looking for a little culture, sunshine, beautiful landscapes and a walk through some of the grandest antiquities on the planet.

I’ve had the pleasure of visiting my ancestral homeland three times and I plan to return. My wife, who’s made the trip with me said, “Of all the places we’ve been, this is the one place I want to see again and again.” That, folks, is high praise.

So I’m glad to read about the good news about Greece that has gone largely unreported. The media were certainly quick to tell us about the gloom and doom.

According to Reuters: “The news is a boost for Greece’s government, which has been promising austerity-weary Greeks better times ahead.”

I hope to read more about those “better times” when they arrive.

We are living in a strange new world, brought to us to by some terrorists who on Sept. 11, 2001 attacked the United States of America by using commercial jetliners as deadly weapons.

Everyone who boards an airplane is subject to potentially intense scrutiny by security agents working for the federal government.

Baldwin was returning from a vacation with his wife and five-month-old daughter, Carmen, when Transportation Security Administration agents decided to pat down — gulp! — the baby.

The sometimes-tempestuous actor tweeted about the incident, signing off with the hashtag #travelingUSisadisgrace.

I won’t get into Baldwin’s previous run-ins with flight crews and airport security officials, but I feel an odd obligation to defend the TSA in this latest incident.

I’m not sure how I would react if I was traveling, say, with my 11-month-old granddaughter and some TSA agent pulled Emma out of a line and started patting her down. I might express more-than-mild surprise, I suppose.

However, from a distance as it relates to little Carmen getting frisked, I have the luxury of being able to reflect just a bit.

Consider a couple of things here:

The bad guys who killed all those people on 9/11 told the world that virtually any act of evil is possible when flying on an jetliner. We also know that terrorists would use any means necessary — any means at all — to harm others. That means they would be fully capable of arming infants with explosive devices.

What’s more, it is totally plausible that someone seeking to sneak contraband into a country — say, drugs or weapons — might consider stuffing it into a baby’s diaper. Is it possible? The question you have to wonder, though, is its probability. Why take the chance to assume that such a thing cannot happen?

I’ve been aggravated myself by overzealous TSA agents in the years since 9/11. My wife and I have traveled some overseas and we’ve been subjected to intense scrutiny by security agents. You haven’t lived, for example, until you’ve been interrogated by an Israeli airport security guard at David Ben-Gurion International Airport in Tel Aviv.

One consideration in this Baby Baldwin pat-down caper has to be how the TSA agent handled it. Was he or she discreet? Was the agent courteous and did the agent explain fully why? My wife and I were leaving Venizelos International Airport in Athens in November 2001 — two months after 9/11 — and had every luggage item searched meticulously by an agent, who took the time to apologize profusely for the intrusion.

Should it be routine to frisk every baby who flies on these commercial jetliners? No. I do get, though, the need to take extra precaution, even if it involves an act that seems ludicrous.