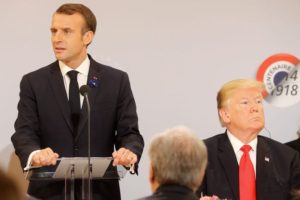 I am not a Franco-phile. I don’t live, breathe or think of all things French. However, I do want to ask the president of the United States to cease with the France-bashing as he keeps tweeting messages in response to criticism coming from our nation’s old and (usually) reliable ally.

Donald Trump fired off a Twitter message that said:

Emmanuel Macron suggests building its own army to protect Europe against the U.S., China and Russia. But it was Germany in World Wars One & Two – How did that work out for France? They were starting to learn German in Paris before the U.S. came along. Pay for NATO or not!

Macron, the French president, doesn’t like the nationalistic tone coming from Donald Trump. He said so publicly in remarks over the weekend at a ceremony commemorating the 100th anniversary of the end of World War I.

Trump decided to return fire with the tired refrain we hear about France’s participation during both world wars.

I want to defend the French for a moment.

First, I am acutely aware that French forces were defeated by Germans in both global conflicts. However, I also am acutely aware of the resistance that French citizens mounted against the occupying forces. That was especially true during World War II. French fighters terrorized Nazi soldiers repeatedly after the fall of Paris in 1940.

Yes, the French set up a pro-Nazi government in the southern part of the country. However, the “Free French” forces played a significant role in major military campaigns as the Allies began their counterattack against the Third Reich. Normandy? North Africa? The French fought alongside their allies from the United States, Canada and Great Britain — and the Poles, Greeks, Dutch, Norwegians and Belgians.

One more point, as long as we’re discussing historical events.

It has been argued that the United States of America wouldn’t even exist without France’s money and military support during the American Revolution.

France has been ridiculed over many decades. Do the French owe the United States for helping free them during World Wars I and II? Certainly. The gratitude, though, ought to go both ways.

Thus, the criticism from the U.S. president directed toward the French president is unfair, childish and gratuitously petulant.

The French have been whipped pretty hard in the United States since, oh, about the time of the 9/11 attacks. Some Americans have resented the French for failing to support our war efforts in Iraq and Afghanistan. Remember those “freedom fries”? Good grief!

I have not joined that chorus. I will, though, applaud the French senate for voting to end children’s beauty pageants.

I’ve long thought of these kiddie pageants as being — how to say it — vaguely perverted. The sight of these little girls prancing around provocatively, with their hair pulled up and their eyes laden with makeup frankly makes me want to hurl.

It is unnatural, unwarranted and unappealing.

Forgive me for saying this, too, but every time I witness a kids’ pageant, a certain name keeps popping into my head: Jon Benet Ramsey, the Colorado girl who also took part in these events and was murdered in a case that drew international attention. Some folks speculated that the killer might have held some disgustingly lustful urges before killing that little girl.

I have no clue as to whether France’s idea of outlawing these pageants ever will become law in that country, let alone catch fire in the rest of the world.

I hope it does.