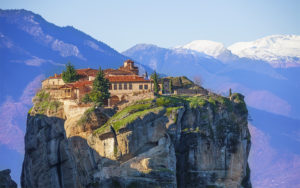 It’s not often that I get moved by a film to visit a place where the film was shot. Such a feeling overwhelmed me today as my wife and I sat through a delightful musical, “Mamma Mia! Here We Go Again.”

The music is fabulous. The cast is stellar, containing many of my favorite actors. But the setting! Oh, my goodness.

Greece is recovering from the financial calamity that befell the country. It’s trying to repay its enormous debt owed to the European Union; make no mistake, a payment in full is highly unlikely. The country, though, is in nowhere near the dire straits it found itself not long after playing host to the 2004 Summer Olympics.

I just watched a beautifully filmed movie that was set in a country in which I have a keen and lifelong interest. It’s my ancestral homeland.

I long have wanted to return. A musical film today added a lot of fuel to that burning desire.

I know. It’s weird. It’s my story and I’m sticking with it.

Greece is the land of my ancestors … all of them.

My mother’s parents emigrated to the United States from Turkey, but they were Greeks through and through. My father’s lineage goes back to the southern peninsula of Greece.

So, when news of Greece is bad, I ache a little bit more than I would if the news were about, say, Sweden or Poland. The Greek economy has been in the news a lot lately. And when the news is good, such as when Greece played host to the spectacular 2004 Summer Olympics, my pride swells.

My heart is gladdened just a bit with news from Reuters News Agency that the Greek economy — you’ll remember, when much of Europe was trying to bail them out with cash — has come back.

Reuters reports: “Seasonally adjusted figures showed the euro zone weakling posted three consecutive quarters of growth this year, even though it had only been expected to exit what the government has
called Greece’s ‘Great Depression’ in the third quarter.”

What has pulled the Greek economy out of the ditch? Some economists have suggested tourism has given Greece its heft. The country has discounted lodging prices and the country continues to be a magnet for tourists looking for a little culture, sunshine, beautiful landscapes and a walk through some of the grandest antiquities on the planet.

I’ve had the pleasure of visiting my ancestral homeland three times and I plan to return. My wife, who’s made the trip with me said, “Of all the places we’ve been, this is the one place I want to see again and again.” That, folks, is high praise.

So I’m glad to read about the good news about Greece that has gone largely unreported. The media were certainly quick to tell us about the gloom and doom.

According to Reuters: “The news is a boost for Greece’s government, which has been promising austerity-weary Greeks better times ahead.”

I hope to read more about those “better times” when they arrive.