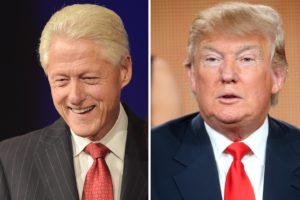 The noted right-wing blowhard Glenn Beck has been quoted suggesting that if the FBI felt compelled to search Donald Trump’s home for evidence relating to alleged criminal activity, then it should have done the same thing to Bill Clinton during an impeachment inquiry of the 42nd president.

Sheesh! Well, as usual, the Beckster has gone far afield in trying to attach moral equivalence to what Clinton supposedly did and what might await The Donald.

President Clinton got caught messing around with a young woman who was working in the White House as a temporary employee during a government shutdown. A special prosecutor got wind of it and then summoned Clinton to testify before a federal grand jury. The panel asked Clinton about the affair. He lied about it.

Thus, he broke the law by committing perjury. Therein rested the Republican Party’s pretext to impeach the president. He went to trial. The Senate acquitted Clinton.

What’s happening now is, shall we say, far more egregious.

Donald Trump is under investigation for a series of allegations: seditious conspiracy, violating the Presidential Records Act, dereliction of duty, a violation of his oath of office.

I might throw in treason, but that’s a bit of a stretch. So, I won’t go there.

Attorney General Merrick Garland is conducting a serious probe into whether Trump broke the law. The FBI obtained a warrant to conduct a search of the ex-POTUS’s home. Trump said it is unprecedented. He is right. Then again, so are the crimes for which Trump might be indicted. Right there is all the moral equivalence anyone should need to justify why the FBI did what it did.

As for any notion that another former president’s home should have been searched for evidence … well, there was nothing to seek. It was on the record with his grand jury testimony. Yeah, it was a phony and lame excuse to impeach a president, given what we’ve witnessed so many years later through the conduct of POTUS 45.

As for Glenn Beck’s assertion, I’ll just take it for what it’s worth, which is not a damn thing.

One thought on “What-about-ism on full display”