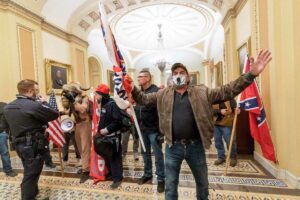 The initial Republican Party reaction to the FBI agents’ search for records within Donald J. Trump’s glitzy south Florida mansion has me a little bit puzzled.

I don’t hear much defense of the ex-POTUS’s conduct coming from the GOP faithful. Who out there is willing to say that it’s all right for a president to squirrel away classified documents taken from the White House? Who is willing to say it’s OK for a president — as it has been reported — to flush documents down the toilet or burn ’em in a fireplace?

No, we’re hearing instead are accusations about “weaponization” of the Justice Department and the FBI. Some GOP lawmakers are suggesting that Attorney General Merrick Garland needs to either resign or be impeached. For what? For following up on his pledge to ensure that “no one is above the law”? When the AG says “no one,” he means, well, no one, not even a former president of the United States.

What does make me chuckle — but only a little bit — is that the right-wingers just aren’t going to say that Donald Trump didn’t do anything wrong.

The man is as crooked as a dog’s hind leg.

As for the Justice Department’s search for wrongdoing, it would be foolish to believe that DOJ — at this juncture of the probe — is going to go easy on what appears to be a mountain of evidence that implicates the man who once took an oath to protect the Constitution, but who in reality launched an all-out attack on it.