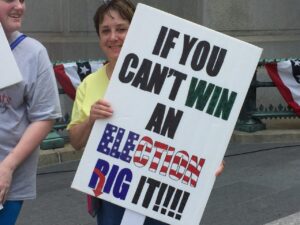 Life is full of uncertainty. However, of this I am totally, unequivocally certain: I will go to my grave never understanding how people who take an oath to protect the Constitution and then defy it openly can call themselves “patriots.”

I am referring to the nimrods who continue to adhere to The Big Lie, that the 2020 presidential election was the product of theft, that it was “stolen” from Donald Trump by “deep state” forces that conspired to install Joe Biden in the White House.

These individuals call themselves patriots because they believe they are right and that the rest of us — the majority of Americans — are wrong in our assessment that the most recent presidential election was conducted fairly and legally and ethically.

The 45th POTUS continues to rant and bellow about a theft that never occurred. He drops broad hints about wanting to run again in 2024 to get it all back.

He calls for states to “audit” their returns from the 2020 election. The former Liar in Chief suggests that even after states complete their audits that he still won. He stands before crowds that cheer him on as he recites that utter nonsense.

These are “patriots”? These are Americans who believe in our system of government? These are dipsh**s cannot accept the notion of their guy losing a hotly contested election and then moving on to wage other fights on other issues?

These individuals are not real Americans. Sure, they are citizens of this country. They have the right to express themselves under the Constitution’s guarantees of free speech and expression. “Real Americans,” though, are those who live by rules of fair play and accept defeat when it is as obvious as anything they can see.

They are not patriots.