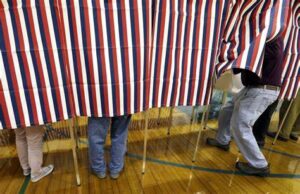 Today was an eye-opener for little ol’ me.

I went to Rockwall to cover a town hall meeting held by U.S. Rep. Pat Fallon, a Sherman Republican and a man who describes himself as a proud conservative. I won’t discuss the congressman’s politics with this brief post.

However, I do want to take a quick look at some of the comments that came from the crowd that listened to Fallon. The comments suggested that the 2020 presidential election was stolen from the guy who lost it. No one said it out loud, but the inference was clear to me: that President Biden isn’t the duly elected winner of what has been called by many the “most secure election in U.S. history.”

He was elected. The election was fair and square and legal. It has been certified by the Electoral College and by election officials in every state of the Union.

The town hall, in a related matter, didn’t mention the 1/6 riot that erupted when the then-POTUS incited the insurrection that sought to stop the Electoral College certification.

What is so very troubling to me was to sit in a room full of individuals who continue to adhere to The Big Lie that the former Insurrectionist in Chief keeps alive. What’s more, I was a bit surprised that no one brought up the 1/6 insurrection, even if they sought justification from Rep. Fallon over what occurred that horrible and horrifying day.

I get that Rockwall County gave the 45th POTUS 68.15 percent of its vote in 2020 and 78.2 percent in 2016. I only can presume that the truth of the electoral integrity of the 2020 balloting just doesn’t sink in with most residents who continue to believe The Big Lie.

It was just staggering to me to sit there among them and listen to them say out loud — and without a hint of shame — that they endorse a notion that has been debunked time and again.