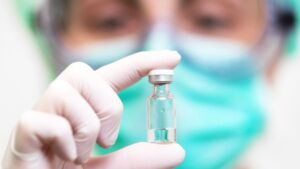 So help me, I cannot get past relishing the decision up yonder in Paris, Texas, to perform an end-around Gov. Greg Abbott’s order barring local governments from imposing mask-wearing mandates on the people they serve.

It’s simply a stroke of genius!

Paris Independent School District trustees voted to make masks a part of the student dress code. “The Board believes the dress code can be used to mitigate communicable health issues, and therefore has amended the PISD dress code to protect our students and employees,” the district said in a statement after the board ruled.

COVID-19 is spiking all over the damn place. The Delta variant is to blame. Too many children are being affected. Paris ISD, which educates about 4,000 students in North Texas, decided it couldn’t stand still while Abbott fought with other districts over their own masking-up decisions.

NBC News reports: Abbott has sought to portray his stance as protecting the freedoms of Texans. “The path forward relies on personal responsibility — not government mandates,” the governor said earlier this month.

Personal responsibility, though, well might get more Texans sick from a disease that could kill them.

Let’s mask up, eh? As for Paris ISD’s creative response to ham-handed authority, I will await other school districts’ decision to follow suit.