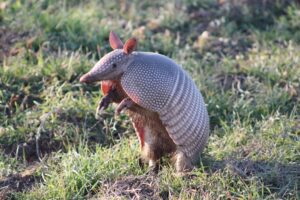 MARTIN DIES JR. STATE PARK, Texas — You know the saying about there being “a first time for everything.”

This particular “first time” took many decades to present itself.

My wife and I saw a live armadillo scampering along a park road in this lovely state park deep in the Pineywoods of East Texas.

You see, we moved to Texas in 1984. That was — gulp! — 37 years ago. The armadillos I had ever seen — until we got here — were those that had been, um, reduced to road kill along our many thousands of miles of highways and bi-ways.

I once wrote a column for the Beaumont Enterprise — where I worked for nearly 11 years after arriving in Texas — about my frustration in never seeing a live armadillo. The only such critters I had seen had been of the type I described a few seconds ago.

We moved to Amarillo in 1995 and I was utterly certain we would see them a-plenty along the arid Caprock. Hah! Fat chance! Indeed, I noticed far fewer armadillo carcasses than we had seen along the Gulf Coast.

Over many years we have traveled the length and breadth of this vast state. Live armadillo sighting? Not a chance.

Until we ventured to Martin Dies Jr. SP.

My hope now for the little critter is that he/she stays the heck out of the way of oncoming traffic.

2 thoughts on “Seen: a live armadillo!”