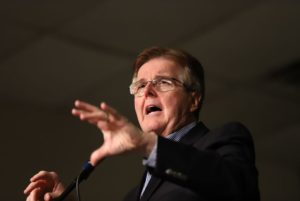 So help me, I cannot get my noggin past that idiotic offer Texas Lt. Gov.  Dan Patrick made some months ago to his fellow Texans.

He offered to pay anyone a million bucks if they produced evidence of widespread vote fraud in Texas during the 2020 presidential election. The offer has become part of the Republican legislative mantra as legislators seek to make it more difficult for Texans to vote.

The link between the offer and the GOP legislative effort is clear: Republicans insist there was fraud; no one has produced a shred of proof of fraud in Texas or anywhere else for that matter.

Patrick — who came into this world with the name of Dannie Scott Goeb (and I don’t know why I mentioned that, other than perhaps to illustrate this clown’s phoniness) — has made vote fraud an issue as he pushes the Texas Senate over which he presides to enact these restrictions.

Why, though, hasn’t Patrick produced proof? Why is he relying on some unknown Texan to provide the Legislature with proof — where none exists — of vote fraud?

The reason the lieutenant governor hasn’t delivered the goods is because there are no goods to deliver. It’s also why he hasn’t been forced to shell out the dough to anyone else who has proof of vote fraud.

It is another version of The Big Lie.

Lt. Gov. Patrick’s offer remains on the table. I do not expect anyone to come forward with proof of vote fraud. Which begs the question: Has the Texas lieutenant governor committed an act of treason — along with the former Nitwit in Chief — by challenging a free and fair election?