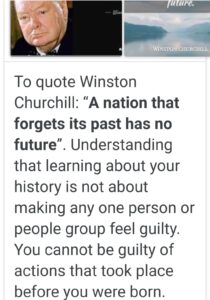 The 20th century’s greatest statesman was so wise on so many fronts, levels and issues.

His view that a nation must remember its past reminds me of something I saw while my wife and I were visiting friends in Germany in 2016.

It is an exhibit that walks visitors through the Nuremberg war crimes trials that commenced shortly after World War II. Axis Powers officials were put on trial for their crimes against humanity. You know, The Holocaust … for example!

Our friend Martin told me straight up that Germany does not hide its past. The descendants of that terrible Nazi regime confront the ugliness of that era head on, he said. “We aren’t proud of it,” he told me. However, they put it all on full display for the world to see.

I came away from the exhibit moved and shaken at many levels by what I read and saw.

Five years later, the debate in this country centers on “critical race theory.” It speaks to the enslavement of human beings by other human beings. It poses fundamentally sound questions about the United States today remains a racist country.

These are not specious questions. They are legitimate. They deserve to be studied and discussed in our classrooms, in our dining rooms, in our living rooms.