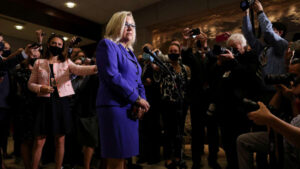 The Liz Cheney soap opera is getting downright weird, man.

The congresswoman from Wyoming, who has just lost her job as House Republican caucus chair, has been asked whether she would run for the GOP presidential nomination in 2024. Her answer: She said she will do anything to stop Donald Trump from getting the nomination.

“I’m very focused on making sure that our party becomes again a party that stands for truth and stands for fundamental principles that are conservative,” she said. “And I won’t let a former president or anybody else unravel the democracy.”

What do you think of that one?

Cheney lost her GOP congressional post because she voted to impeach Donald Trump after he incited the Jan. 6 insurrection. She hasn’t let up on the ex-POTUS. She calls him a threat to our democratic process.

She is correct about the danger Trump poses. The House GOP, though, is looking to populate its leadership roster with Donald Trump suck-ups. That ain’t Cheney.

Why, we’ll just have to stay tuned.