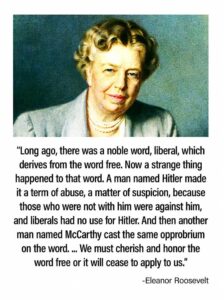 Yes, the term “liberal” has become a four-letter word.

For that we all should share in the shame of the demonization of a proud political philosophy. The quote attached to this brief blog post is attributed to the woman pictured with it, Eleanor Roosevelt … arguably the prototype of the modern first lady.

What troubles me about the degeneration of the term “liberal” is how liberals don’t even call themselves that these days. They call themselves “progressive.” I hear congressional liberals, virtually all of them Democrats, refer to their “progressive” agenda. They are afraid of what and who they are.

When did it become an epithet? I’ll go back to the days of the Contract With (on) America election of 1994. The conservative fire-breather who led the Republican takeover of Congress that year was Newt Gingrich, a House member from Georgia, who said the following:

“We intend to make liberals the enemy of normal Americans.”

I did not make that up. He actually said that and exhorted the conservatives who comprised the Republican ticket in all 50 states to do as Newtie suggested; they made liberals the “enemy of normal Americans.”

Here’s the weird part of that story: They succeeded. They whipped conservative Americans into a frenzy to establish the evil credentials of liberal politicians.

The conservative movement has continued to demonize liberal politicians. They have called them un-American. They speak to many Americans’ darker instincts.

The term “liberal,” though, is meant to connote an open mind, to look beyond the strict boundaries, the limitations of government. My goodness, there’s nothing evil in that.

So, I will examine the remarks attributed to Eleanor Roosevelt with thought and will make a solemn vow: I will not shy away from the term that defines my political world view.