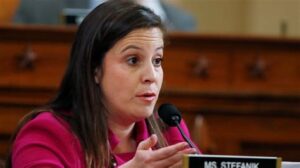 I have done a little sniffing around about the individual who is likely to succeed U.S. Rep. Liz Cheney as the House Republican Conference chair.

Rep. Elise Stefanik is campaigning hard for the post among her GOP colleagues. She wants to be a leader among House Republicans. She has gotten the endorsement of the ex-POTUS, Donald Trump.

Here’s what I have found out. Stefanik is not a mainstream or a Trump conservative. Her sole qualification for the job apparently is that she stuck up for Trump when he got himself in trouble over trying to seek political favors from a foreign government and then for inciting the insurrection.

Conservative political action groups rate her pro-Trump voting record at around 77 percent; Cheney’s is at about 92 percent. You want more? Let’s try these:

Stefanik voted against the Trump tax cut proposal in 2017; she voted in favor of the Equality Act that stood for greater rights for gay Americans; Stefanik opposed Trump’s decision to ban entry into the United States of people coming from certain Muslim countries; Stefanik was one of 14 Republicans to vote with all House Democrats to override Trump’s veto of a measure unwinding the latter’s declaration of a national emergency at the southern border.

Do you get where I’m going with this? She opposed Trump on several key Trump-supported initiatives. She was decidedly less conservative than Rep. Cheney.

Do you think for a nano-second that Donald Trump gives a rip about such mundane matters as, um, legislation and government policy? Hell no! All he wants is blind loyalty.

He isn’t getting it from Liz Cheney. Elise Stefanik has provided the requisite brown-nosing that the ex-POTUS demands.

A cult of personality? There you have it.