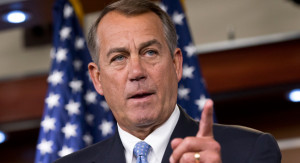 As glad as I am to hear former U.S. House Speaker John Boehner speak out against what he calls “political terrorism” within the Republican Party, I would be remiss if I didn’t recognize an obvious element of history.

While the ex-speaker decries the harsh partisanship that has infected the current political climate, he needs to own his particular contribution to that infection.

He called the Affordable Care Act the greatest sin ever perpetrated on Americans. Boehner filed lawsuits to stop the implementation of President Obama’s signature domestic policy achievement. He did plenty of blustering and bellowing from the House floor about the evils of his Democratic colleagues’ intent.

Has the former speaker had an epiphany? Has he realized what he did contributed to today’s toxicity? I hope that is the case.

Still, to hear him refer to Sen. Ted Cruz as “Lucifer in the flesh,” and to express his profound revulsion over the insurrection that occurred on Jan. 6 remains music to my admittedly partisan ears.