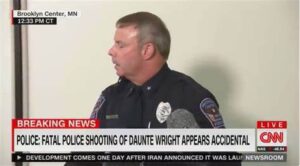 Kim Potter and Tim Gannon have just joined the ranks of former police officers caught up in a hideous law enforcement incident.

Potter quit the Brooklyn Center, Minn., Police Department after shooting a young motorist after allegedly thinking she was going to fire her taser at him. Gannon, the police chief of the small department, quit as well. Both of them are white. The victim of the shooting, Daunte Wright, was black.

CBS News reports: Without explicitly referencing the shooting, Potter wrote in her resignation letter: “I believe it is in the best interest of the community, the department, and my fellow officers if I resign immediately.”

The uproar has been tremendous. Brooklyn Center sits a chip shot distance away from Minneapolis, where former cop Derek Chauvin is on trial for murdering George Floyd in another police incident involving a white officer and a black victim. The trial has been covered worldwide.

Is there another more ghastly juxtaposition than that?

Potter was a 26-year veteran of the Brooklyn Center PD. She stopped Wright supposedly because Wright was driving with an air freshener hanging from his rearview mirror; something about “sight obstruction” was the cause of the traffic stop. It escalated badly.

Potter yelled “taser!” at Wright, then shot him with her service pistol. Gannon called the incident an “accidental discharge” of a weapon.

Oh, my goodness. So many questions that need answering. The one that jumps out to me is this: How does a veteran police officer mistake a fully armed service pistol for a much lighter taser device? While we’re at it, how does an officer who is trained to carry her firearm on her “strong” side while carrying the taser on her “weak” side, meaning that a right-handed officer — such as Kim Potter — is instructed to carry the weapon on his or her right hip.

These resignations must not signal the end of the police investigation into this terrible incident.

It looks for all the world to me as if we are just beginning an arduous journey toward the truth of what happened to Daunte Wright.

One thought on “Cop, chief both quit”