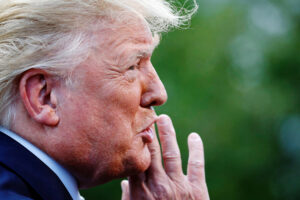 Donald J. Trump is facing an extraordinary political hurdle as he campaigns for re-election as president of the United States.

It has been revealed that Trump and Ukrainian President Volodymyr Zellenskiy chatted by phone and that Trump sought to hold up a pledge for military aide to Ukraine over a “favor” that would provide dirt on Joe Biden, a potential political rival.

Trump has been accused now of jeopardizing national security because the president is abusing the power of his office.

Congressional Democrats are hurtling toward impeaching the president. What happens if the House actually impeaches him by, say, Thanksgiving?

Here’s where the hurdle stands in his way: What happens if the House impeaches Trump while he is in the midst of a re-election campaign? This unprecedented territory!

President Nixon won re-election in a landslide in 1972 and then quit the presidency in 1974 as the House was preparing to impeach him over the Watergate burglary/cover up. President Clinton won re-election in 1996 and then got impeached in 1998 because he lied to a grand jury about his relationship with a young White House intern; he, like Nixon, had no more campaigns to wage.

Donald Trump’s predicament is unparalleled. If the House impeaches him, he might be forced to run for re-election while shrouded under the darkest of political clouds.

None of this, of course, presumes what the Senate will do were it to receive the formal complaint against the president. I am wondering whether it will move to conduct a trial quickly or wait until after the election … for reasons I don’t quite understand.

I remain a bit reluctant — although decreasingly so — to push the House to proceed with an impeachment. I still would prefer an election to determine whether Donald Trump stays in office. However, the evidence of wrongdoing, corruption and frightening abuse of power well might compel the House to act rapidly.

Will it impeach the president as he prepares to run for re-election?

If it does, I will wait with bated breath to see how Donald Trump seeks to use an impeachment as a reason to re-elect him.