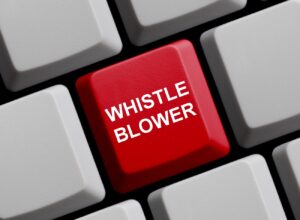 Mr. President, you should be ashamed of yourself.

Oh, wait. I almost forgot. You have no shame.

For you to suggest that the individual who blew the whistle as he or she saw fit is “almost a spy” is preposterous and frightening in the extreme.

The whistleblower is protected by federal law. You ought to know that. You also ought to realize that acting Director of National Intelligence Joseph Maguire said the individual “acted in good faith.”

The whistleblower has reported out that White House officials sought to cover up your attempts to bully/pressure/coerce foreign government officials to interfere in the 2020 election. What’s more, for you to suggest that the foreign government assist in digging up dirt on a potential political opponents only worsens matters beyond anything we’ve ever seen.

This individual has done what he or she believes is right.

Yet you — as is your hideous habit — chose to call this person a “political hack” and then you decided to up the ante by saying this week that we used to treat spies differently “when we were smart.” Are you really suggesting, Mr. President, that this whistleblower should be executed? Is that the message you seek to convey?

From where I sit, Mr. President, the whistleblower has performed a patriotic — perhaps even heroic — act on behalf of the nation. Whoever this individual well might have exposed to us all the corrupt intent that seems to pervade every decision to you make.

Yet you throw out threats of reprisal against this individual.

That is a shameful, disgraceful and despicable act of arrogance and ignorance on your part, Mr. President.

I cannot say this with enough passion: I want you removed from the office you occupy. I would prefer to leave that process to the 2020 election, but if impeachment and conviction in a Senate trial does the job … well, so be it.