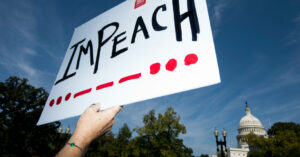 The phone call has accelerated calls among congressional Democrats to impeach the president, citing allegations that he has solicited a political favor from a foreign head of state.

Rep. Turner, a Republican from Ohio, said that any impeachment of the president would be “an assault on the electorate” as well.

I heard it this morning. My jaw dropped.

Impeachment is no … such … thing. It is not an assault on the electorate.

Let’s back up a bit through history.

President Nixon got caught covering up a scandal involving the Watergate break-in. He was re-elected in a historic landslide in 1972, winning 49 states and rolling up about 62 percent of the vote.

Congress didn’t get around to investigating the scandal until 1973. Then in 1974, the House Judiciary Committee approved articles of impeachment against the president. He resigned shortly thereafter. Was that impeachment effort an assault against an electorate that voted overwhelmingly to re-elect him? No. It was an act of righteous anger by Congress over the president’s abuse of power.

President Clinton was summoned to testify before a federal grand jury in 1998. He took an oath to tell the truth, then he lied to the grand jury about a relationship he had with a White House intern. House Republicans declared that a president who perjured himself was unfit for the office. They impeached him after he had been re-elected by an Electoral College landslide and after he won a healthy plurality of the vote among Americans.

Was the Clinton impeachment an “assault on the electorate”? No. It was, according to the GOP, an effort to preserve the sanctity of the law that all Americans are obligated to obey.

Donald Trump’s troubles center on allegations that he has violated the Constitution by soliciting a political favor from a foreign head of state. According to the notes of a phone call between Trump and the Ukrainian president, Trump well might have held up military aid funds in exchange for dirt on a potential political foe, former Vice President Joe Biden.

An “assault on the electorate”? Hardly. Let me remind y’all that Trump got fewer votes than his 2016 opponent, but managed to squeak out an Electoral College victory. Yes, he was elected according to the Constitution, but this impeachment effort does not constitute an assault on an electorate, a minority of whom voted for the president.

This effort needs to play out. Rep. Turner, furthermore, needs to focus on the issue before him and stop making dubious assertions about “assaults” on the American electorate.