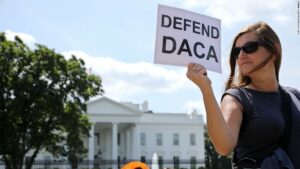 You remember the folks who were granted resident status under the Deferred Action for Childhood Arrivals, correct?

Yep, those are the DACA movement folks who have been swallowed up by the political debate over whether they should be deported to countries they’ve never known.

As the country writhes in pain over the latest spasm of gun violence, much of it aimed at Latin Americans who have come to this country, I want to revisit briefly an issue that seems to have been shoved under the bed.

Donald Trump rescinded Barack Obama’s executive order granting DACA status to those who came here as children when their children entered the country illegally. DACA recipients were deemed to be criminals, even though many of them came here as small children.

Many of them have come of age as de facto Americans. They have performed well in school. They have earned academic honors. They have succeeded in business. They have reared their own families.

Oh, but they are “illegal residents” of the only country they have known. Their country of origin is a foreign place. They have no ties to them.

I want the Democratic Party presidential candidates to speak more clearly about how we can settle this DACA matter. My own preference is for them to pledge to restore the DACA standing given them by President Obama. Allow them to work toward citizenship or permanent resident status. Do not deport them, sending them to countries for which they have no connection.

Yes, we need to discuss the shootings. We need to search for ways to end this violence. We need to stem the hate speech that prompted someone to murder those victims in El Paso.

We also need to find a solution to the DACA matter that lingers. Kicking them out of the country is no answer.