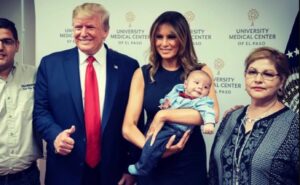 This picture well might provide one of the most glaring examples I can imagine of Donald Trump’s unfitness for the presidency of the United States.

There he is, standing alongside first lady Melania Trump. They were visiting El Paso, Texas, on what was billed as a mission to lend aid and comfort to those who experienced the horrific massacre at the Wal-Mart shopping center this past weekend.

The moment demanded solemnity. It required the president to embrace family members. To tell them he supports them.

So … what does the first couple do? They pose for pictures that included an infant who was made an orphan when his parents were killed by the lunatic who opened fire at the Wal-Mart complex.

Don’t they look happy? Aren’t they just so darn full of good cheer? Is that the image they should project while the nation mourns the deaths inflicted in El Paso and also in Dayton, Ohio? I’ll answer the final question: Hell … no!

When the president’s critics talk about his lack of empathy, his inability — or unwillingness — to express authentic sorrow, this is the image they might use to illustrate the point.

The baby has no idea what has happened. That is not even close to the point! My point is that president and the first lady ventured to the latest “ground zero” of gun violence in the United States. Twenty-two people died at the hands of a madman. There is mounting evidence that the shooter was inspired by the anti-immigrant rhetoric that has come from the president.

Has the president owned any of that? Has he suggested even the slightest hint of remorse or regret at the things he has said that could have spawned such insanity? No. He has not done anything of the sort.

The job of president compels the president at times of national grief and shock to speak from his heart. It’s an unwritten part of his job description, but it’s there. Did the president deliver on that responsibility? No. He went to El Paso and Dayton and sought to turn the tours of both cities into self-serving testimonials.

Then he grins like a doofus in the presence of an infant who is going to grow up never remembering the man and woman who brought him into the world, two victims of gun violence gunned down in the worst slaughter ever inflicted on the Latino community.