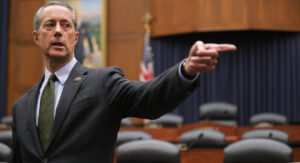 About a half-dozen Republican congressmen and women have announced their intention to leave Congress at the end of their current term.

Some of those GOP lawmakers serve in reliably Republican congressional districts, so their re-election chances really are not in jeopardy.

My thoughts now turn to the man who was my congressman during my many years living in Amarillo, Rep. Mac Thornberry, a Republican from Clarendon.

Is it fair to ask whether he’s going to bail at the end of this term?

Hey, I just did. So there you have it.

Thornberry took office the same week I reported for duty at the Amarillo Globe-News. That was in early January 1995. I have kidded him over the years that we kind of “grew up together.” He served on Rep. Larry Combest’s staff before defeating incumbent Rep. Bill Sarpalius in that landmark Contract With America election in 1994 that saw Republicans take control of Congress for the first time in 40 years.

He ascended a couple of terms ago to the chairmanship of the House Armed Services Committee. Then Democrats took back control of the House in 2018, relegating Thornberry to the role of “ranking member.”

He’s been in the House now for 24 years. I have disagreed frequently with his policy decisions or the votes he has cast. I say that while acknowledging that I like him personally. We had a good professional relationship and I always thought I worked well with his staff.

However, many Republicans in the House are finding it difficult to legislate in this Age of Trump. The president is untrustworthy and I am left to wonder whether his capriciousness wears thin even on those legislators who have supported him and his agenda.

That well could be you, Mac Thornberry.

If Thornberry decides he has had enough, I certainly would understand. Rest assured, too, that Thornberry is one of those politicians who represents a rock-solid Republican congressional district. The 13th Congressional District isn’t going to turn Democratic.

I don’t live in the 13th any longer, but it’s difficult to turn away from a politician with whom I share some history.

2 thoughts on “Is it Rep. Thornberry’s turn to announce retirement?”