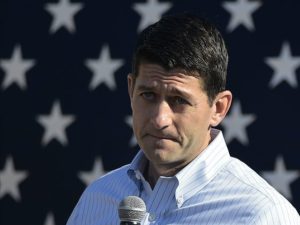 I had high hopes for Paul Ryan when he was dragged kicking and screaming into the speakership of the U.S. House of Representatives.

The Wisconsin Republican reportedly didn’t want to become the Man of the House when John Boehner resigned his speakership and left public office in 2015. Ryan had to be talked into it.

He took the job. I was hopeful that this policy wonk, a serious young man who knows the ins and outs of public policy would be able to manage the House effectively and work to enact meaningful legislation. I had hoped he could work effectively with the Democratic minority in the House chamber.

Then I had hope that after Donald Trump was elected president in 2016 that he could resist some of the new president’s more bizarre impulses.

Ryan ran on the 2012 GOP ticket for vice president. He and Mitt Romney lost that election to President Obama and Vice President Biden. He went back to the House, resumed his post as Budget Committee chairman. Then fate — and Speaker Boehner’s frustration with the TEA Party wing of his party — delivered him to the House’s highest post.

If only he could have shown a bit of spine as the Republican In Name Only president proceeded to hijack a great political party. There were faint signs of spine-stiffening, such as when he would offer mild criticism of some crazy Trump utterances.

But then he would roll over as Trump pushed through the House a tax cut that over time will benefit only the wealthiest of Americans.

Speaker Ryan gave a farewell speech today, bidding goodbye to the House where he served for two decades. He lamented the “broken politics” that afflicts the House. Uh, hello, Mr. Speaker? You helped break it.

I, of course, live far away from Janesville, Wis., from where Ryan hails. However, given that he managed the legislative body that approves legislation that affects all Americans, I have a significant stake in the job he did.

Thus, I shall declare that I won’t miss Paul Ryan.