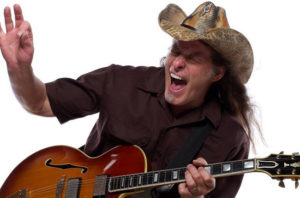 Donald J. Trump’s recent guests at the White House have drawn some chatter around the country.

I won’t discuss the former half-term Alaska governor (and 2008 Republican vice-presidential nominee) or Kid Rock in this post. Nugent’s presence in the White House, though, is worthy of a brief — and unkind — comment from yours truly.

The Motor City Madman disgusts me at many levels. The idea that he would darken the White House door — the house that belongs to you and me — is revolting.

Robert Reich, the former secretary of labor in the Clinton administration, noted this on a social media post:

“Nugent once referred to former President Barack Obama as a ‘mongrel.’ He has said he wanted to shoot former Senate Majority Leader Harry Reid, and called for Obama and Hillary Clinton to be assassinated. In 2012, after making a threatening remark about Obama, Nugent was the subject of a Secret Service investigation.

“As Trump’s dinner guest, Nugent was asked if he regretted his comments about Obama and Clinton. He responded, ‘No! I will never apologize for calling out evil people.’”

It’s not Nugent’s politics that should disqualify him from entering the White House. I get that he’s a political conservative; he’s an avid Second Amendment activist. That’s all fine as far as it goes. We’re all entitled to our points of view and political opinion.

However, this washed-up rock guitarist has a lengthy record of uttering profoundly hideous diatribes against people with whom he disagrees. The “mongrel” comment about the former president is just one of them.

The notion that the current president of the United States would welcome someone who has spoken so disgracefully about a former president demonstrates why so many millions of Americans believe he is unfit for the office he occupies.