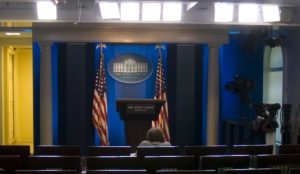 I’ve been trying to determine when I’ve ever seen a president of the United States treat the media in the manner being displayed by the current one.

I cannot remember a single time. Not even during President Richard Nixon’s time in the White House.

Donald Trump has shown utter contempt and disrespect for the men and women assigned to cover the White House for their various news organizations.

It manifests itself when he gets a question he dislikes. He tells reporters to “sit down, that’s enough” when they seek to elaborate on their question, to fill in a blank or two. No, the president will have none of it.

Forget for a moment that he calls them “dishonest” out loud, in public, to their face … and then expects these fellow human beings to treat him with kid gloves.

The disrespect — as I’ve witnessed it — is unlike anything I’ve ever witnessed, even from afar.

If we march back through time — starting from Barack Obama and going backward — I cannot remember a president acting the way this one does in front of the media.

There was one memorable, testy exchange in the 1970s between then-CBS News correspondent Dan Rather and President Nixon. The president was getting entangled in the Watergate scandal and Rather asked him a pointed question. Some members of the press gallery chuckled, some even clapped. Nixon asked Rather, “Are you running for something?” Rather responded, “No, Mr. President, are you?”

Presidents usually have strained relations with the media. They dislike negative coverage, as does any politician — no matter what they might say. As I’ve watched presidential/media relationships from a distance over the years, I have noticed a sometimes cool cordiality between the Big Man and the media that cover him.

What we’re getting now is open hostility and an exhibition of extremely bad manners from the guy who needs the media as least as much as they need him.

I’m trying to imagine what will occur if and/or when the crap really hits the fan at the White House. I fear the president will go berserk.

Didn’t someone mention temperament as a quality we look for in a president of the United States of America?