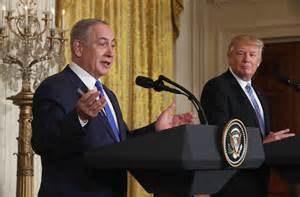 Let’s revisit for a moment Donald J. Trump’s statement that backs away from a decades-old U.S. policy in support of a two-state solution for lasting peace in the Middle East.

The president, meeting with Israeli Prime Minister Benjamin Netanyahu, said he could support a “one-state solution” if both sides agree to it.

Hmmm. How would that work?

This is why previous presidents of both parties have supported a two-state solution that would allow Israel and the Palestinians to live side by side.

Yes, there remains a huge hurdle to clear: The Palestinians must accept Israel’s right to exist and they must cease the terrorist attacks — launched by groups such as Hamas and Hezbollah — against Israeli citizens.

If there can be an accord reached, it appears that the only option is for a two-state solution.

Why, then, did the president back away from what all of his predecessors have sought for the embattled Middle East?