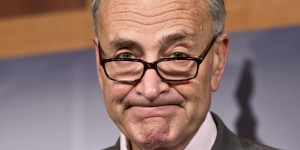 I believe it was that great fictional Native American sidekick — Tonto — who said to the Lone Ranger, “Two wrongs don’t make a right.”

Thus, it amuses me when I hear critics of this blog and others take note of Democratic U.S. Sen. Chuck Schumer’s declaration in 2007 that the Senate shouldn’t approve any of President Bush’s Supreme Court appointments.

They bring that up to — more or less — justify a statement by Republican U.S. Sen. Mitch McConnell to do the same thing regarding the vacancy on the U.S. Supreme Court.

If Schumer can make a wrongheaded declaration then it’s OK for our guy to do it, they seem to suggest.

Schumer was wrong then and McConnell is wrong now.

Neither man has distinguished himself on this matter of constitutional authority and presidential prerogative.

So, Schumer’s assertion in 2007 got past me. He absolutely was wrong to say what he said. The U.S. Constitution gives presidents the authority to make appointments to the federal bench and I’ve long given deference to the presidents’ prerogative on these issues. If the president nominates a qualified individual to these posts, then the Senate should grant the appointee a fair hearing — and then vote.

George W. Bush was re-elected in 2004 with voters knowing he would appoint conservative judges to the federal courts. His final Supreme Court appointment came in 2006 when he selected Samuel Alito. Thus, Schumer’s ill-advised admonition a year later became a moot point.

It doesn’t give Senate Majority Leader McConnell any license to erect barriers to the current president doing what he was re-elected to do.

One thought on “It’s wrong now … and was wrong then”