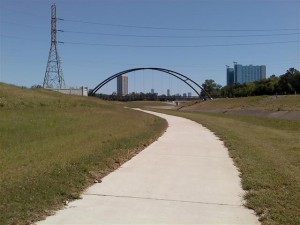 Let’s get real. Texans love their cars, trucks and just about any vehicle that burns fossil fuels.

We pull a lot of fossil fuel out of the ground here. The Spindletop oil gusher in 1901 brought us the Texas oil boom and it has continued ever since, with all of its ups and downs.

There’s nothing inherently wrong with that. Heck, our 21-plus years in West Texas have given us a keen appreciation of how much distance one must travel . . . to get anywhere. It almost always involves a motor vehicle.

So it is with that I noticed this story — yes, it’s a bit dated, having been reported initially in the fall of 2014 — about a proposal to build a 64-mile bicycle trail between Dallas and Fort Worth.

KERA-TV reported more than a year ago that a study of Dallas residents reveals a significant portion of folks would support greater emphasis on bicycle trails in their city.

It’s being called a “superhighway.” It marks a remarkable departure from the love affair Metroplex residents have had with their motor vehicles.

So now comes the question from me, a resident of another community in the midst of some serious urban living change.

Is such an emphasis possible here, in Amarillo?

It’s a creative notion to connect two cities the size of Dallas and Fort Worth with a bicycle trail network.

It prompted this thought: Is such a network possible that would connect Amarillo with Canyon?

Amarillo’s downtown district revival already has begun. They’ve busted up plenty of pavement and begun erecting some structures in the central business district. More construction is on the way.

I am wondering, though, about the city’s effort to connect neighborhoods with bike trails. That project began about a decade ago. Then it stopped. Indeed, we have bike lanes marked off in my neighborhood, which is great. Except that they don’t go anywhere.

I have been told that the city Parks and Recreation Department plans to finish the bike trail network — eventually.

The reality is that the weather here is conducive to that kind of activity. The unseasonably warm winter we’re having is an aberration. Spring can be a bit dicey; summer isn’t oppressively hot; autumn is the most pleasant season of all.

The Metroplex bicycle “superhighway” is still a couple of years away, according to KERA. I do applaud the innovation that’s gone into planning for it.