GRANTS, N.M. –– This story got past me until this recently when my wife and I ventured through New Mexico en route to points west.

It involves New Mexico Gov. Michelle Lujan Grisham, who according to reports I read followed the Donald J. Trump playbook of paying an accuser a lot of money while denying the accusation leveled against her.

Grisham, a Democrat, forked over 150 grand to a former campaign staffer who said she grabbed by his crotch — in front of a lot of people. He complained, threatened legal action and then got paid the money to keep quiet.

Except that Lujan and her allies deny the event took place.

All of this makes me scratch my noggin and ask: If it didn’t happen, then why pay the dough?

Trump denies to this day it happened … but he forked over the cash because he wanted Daniels to be quiet about the non-encounter. 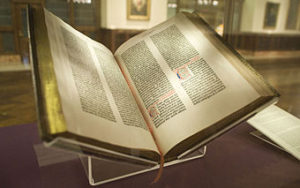 They call it “what about-ism.” It’s when someone makes a critical statement about someone and you respond with “what about” the time so-and-so did something worse.

Donald Trump has accused Joe Biden of being “against the Bible” and “against God.” That he wants to “hurt God.”

I want to revisit that idiocy for just a moment.

You see, that Donald Trump — of all people! — would say such a thing is laughable on its face … except that it isn’t funny.

Biden is a lifelong practicing Roman Catholic. Trump has no religious experience that anyone has been able to identify.

Trump’s assertion about the presumed Democratic Party presidential nominee must be judged for what it is: a cheap, tawdry political stunt. 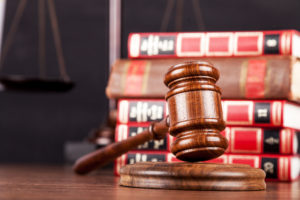 Well now, this is judicial independence at its finest.

The U.S. Supreme Court, in a stunning 7-2 ruling, has told Donald John “Lawbreaker in Chief” Trump that he is not above the law and that a New York-based prosecutor is on solid legal footing in seeking Trump’s financial records as part of an ongoing investigation.

Why is this so remarkable? Two conservative justices nominated by Donald Trump, Neil Gorsuch and Brett Kavanaugh, sided with the majority in declaring that the president of the United States is “not above the law.”

What does this mean? Well, Manhattan District Attorney Cyrus Vance Jr. gets to proceed with a probe into whether Trump broke the law when he wrote a stripper a $130,000 check to buy her silence over an allegation that she and Trump had a one-night affair prior to Trump taking office as president.

Vance is going to obtain Trump’s complete financial record as part of his probe and then we might learn about those mysterious tax returns that Trump has refused to release to the public for its review.

Donald Trump has been fighting all of this hammer and tong, as you might expect. He staked his argument on a notion that a president is not subject to grand jury inquiry. The high court said “no so fast, Mr. President.” Indeed, Justice Kavanaugh made the specific point that the president is not above the law.

The next question now is whether Cyrus Vance will move quickly in obtaining that information and will it become known prior to the Nov. 3 presidential election. I won’t offer a prediction, but instead will express my desire that the public is given a chance to review Donald Trump’s financial dealings prior to deciding whether he deserves another term in office. 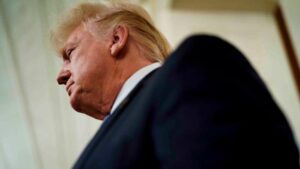 What do you know about this? Donald Trump, a native of New York City, the guy who built his business there, who has called Trump Tower in Manhattan his official residence since 1983, now has changed his residence to Florida.

I’m not sure if Trump’s declaring Florida as his official residence makes it more difficult to obtain those returns. Still, it sure looks to me as if the president is trying to keep something out of someone’s hands. 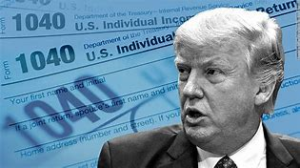 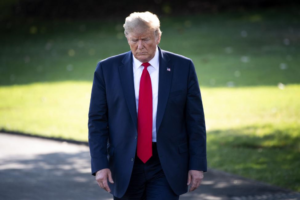 Manhattan District Attorney Cyrus Vance has invoked the legal power of his office to seek to obtain something that has been on the minds of millions of Americans since the moment Donald Trump announced his campaign for the presidency of the United States.

Stephanie Clifford, aka Stormy Daniels, is back in the news.

Clifford said she and Trump had a one-night tumble in 2006 in a hotel room. Trump said it didn’t happen, but he paid her 130 grand to keep quiet about it anyway. Go figure.

Vance wants to see Trump’s tax returns over the past eight years to find out the details of how the payment was made and whether the president violated campaign finance laws to make it.

Well now. How do you think this will turn out?

You see, Trump once promised he would reveal his taxes. Then he changed his mind. Then he said he would do so again. Then he backtracked again. He contends the Internal Revenue Service is auditing his taxes; the audit bans him from releasing the returns, he said. The IRS said, um, no … the audit does no such thing.

Donald Trump has lied and dissembled over the tax returns.

Vance reportedly informed the president’s accounting firm(s) of his desire to see the returns. Trump no doubt will fight it like hell, which I guess is his right.

The liar in chief, though, promised full transparency regarding his tax returns. He has failed to deliver on that promise, just as he has failed to “make America great again.”

Count me as an American who wants DA Cyrus Vance to get his hands on the tax returns. While he’s at it, he can let the country know what they contain.

Of the countless lies that have flown out of Donald Trump’s mouth since the moment he became a politician, he just might have committed the worst of them . . . to date.

“I don’t do cover-ups,” he said today in response to an accusation leveled against by House Speaker Nancy Pelosi, who has alleged that the president is covering up for his misdeeds regarding the 2016 election.

So now the president says he doesn’t “do cover-ups.”

Well, I believe the adult film star Stormy Daniels would disagree. Must I remind readers here of the 130 grand that Trump paid to Daniels to keep her quiet about a tryst the two of them had in 2006?

Oh, wait! Trump said the get-together never occurred, but he paid her the six-figure sum anyhow.

Knock it off! You’re killin’ me! 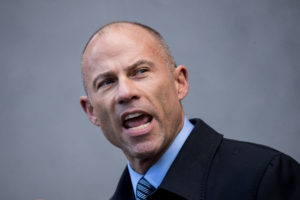 Michael Avenatti, the loudmouth lawyer who once represented Stephanie Clifford — aka Stormy Daniels — has been arrested and charged with trying to extort $20 million from Nike Corp.

Avenatti became a talk-show staple while he was representing Clifford/Daniels, the adult film actress who allegedly had a sexual relationship with the future president of the United States, Donald Trump. She received a $130,000 payment to keep quiet about the alleged encounter, even though Trump said it didn’t happen. Well, go figure.

Avenatti got so much mileage from his representing the future president’s one-night squeeze he considered running for president of the United States in 2020. He has scrapped those POTUS plans.

He has been accused of threatening Nike with negative publicity if it didn’t pay him the dough.

This clown is entitled to his presumption of innocence. I’ll grant him that presumption.

Still, there’s another part of me that secretly is cheering federal prosecutors on in their quest for a conviction. Why? Let’s just say Avenatti pi**** me off with his constant talk-show blathering about Trump, his client and how he intended to savage the president were he to run as a candidate for the White House.

His moment in the limelight looked for all the world like someone seeking to capitalize on the proverbial “15 minutes of fame.”

Check out the complaint, which is contained in this link. 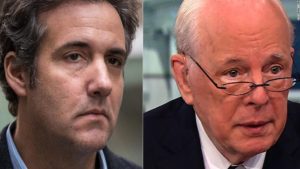 I had to chuckle when I heard a commentator compare Donald Trump’s former lawyer/fixer/friend to Watergate conspirator John Dean.

Michael Cohen is set to testify this week before the House Oversight Committee about what he knows regarding his former friend’s dealings with, oh, Russian government officials and an adult film actress with whom he allegedly had a fling some years ago.

Cohen already has pleaded guilty to lying to Congress about the president’s conduct. He’s facing a three year prison term once he finishes his testimony.

Many of us are waiting with bated breath at what Cohen will tell the committee. Many of us waited also with bated breath back in 1973 when John Dean, the former White House counsel, told a House committee that the Watergate scandal had produced a “cancer on the presidency.” We gasped. Dean spilled a lot of the beans about President Nixon knew and when he knew it.

Dean then would spend some time in the slammer. He’s now a contributor to MSNBC, CNN and a few other organizations that call on him to talk about the current crisis that threatens another presidency.

Cohen is not a good guy. He is a liar and a cheat. Dean wasn’t a good guy either back in the day, as he, too, lied and cheated to protect an earlier president.

Will this guy, Cohen, emerge as the next John Dean? I am afraid he already has done so. 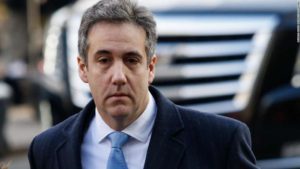 You’re a TV network boss. You run a multibillion-dollar enterprise that relies on viewer interest in the programming  you present.

Then you hear that the U.S. House Oversight Committee is going to summon Donald Trump’s former lawyer/fixer to testify about the role he played in the president’s myriad activities relating to (a) the Russian government, (b) his alleged relationships with an adult film actress and a Playboy model and (c) other matters that have dogged his presidency.

What do you do? The Feb. 7 hearing might be a ratings blockbuster. Or, it might be a dud. Do you preempt your regular programming to show this testimony live? If I were in that place, I’d go with televising the hearing.

Michael Cohen is facing a three-year prison term after pleading guilty to campaign violations and assorted other felonies. He says he’s done lying to protect the president. He has been working with special counsel Robert Mueller’s legal team as it investigates alleged “collusion” with Russian operatives who interfered with the 2016 presidential election. Cohen might want to spill every bean in the bag in order to get a sentence reduction.

This hearing has the potential of turning the presidency of Donald Trump on its head. A lot of Americans have a keen interest in the future of this man’s presidency. His supporters want him to shake off the questions once and for all. The president’s detractors want, well, a vastly different outcome.

If you are a network TV exec, you ought to gamble on the former.

I intend to clear the decks on Feb. 7.