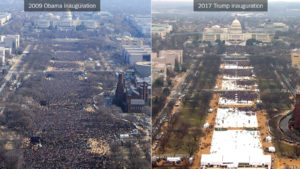 Donald Trump has bragged about the stupendous size of the crowd that witnessed his inauguration. He, um, misspoke, er, lied about it.

What he’s never bragged about is the amount of money he raised for an event that in truth was a good bit smaller, with less bling than either of the inaugurations of Barack Obama or George W. Bush.

And that has become yet another focus of federal prosecutors who are looking at this man’s presidency.

Trump reportedly raised $107 million for his 2017 inaugural. Compare that with the $53 million raised for Barack Obama’s 2009 inaugural, the one that heralded the start of a truly historic presidency.

The Obama inaugural featured headline artists galore, not to mention a crowd that totaled more than 1 million spectators. The Trump inaugural had, um, a lot fewer acts, a lot less pizzazz and drew a lot fewer spectators to watch the 45th president take the oath of office.

However, the Trump inaugural team banked a lot of cash.

That has presented prosecutors with a series of questions. Why did they raise so much money? For what purpose did the donors give that kind of dough? Is it all above board, legal, transparent? Did the new president’s team turn back any of it, the way Obama’s inaugural team did with some of the donations it received prior to the president taking office?

It looks to me as if we have a mushrooming investigation. It started with a look into alleged collusion between the Trump campaign with Russian operatives who interfered with our 2016 election. It appears to be spreading to include the president’s business dealings in Russia, along with the conduct of members of Trump’s transition team.

Hey, this kind of thing happens with these probes. Special prosecutor Ken Starr started looking at an allegedly shady real estate deal in Arkansas involving President and Mrs. Clinton; it veered into another area altogether, an inappropriate relationship between the president and a White House intern. Starr summoned the president to testify to a grand jury, the president lied to the grand jury about the relationship and, thus, handed congressional Republicans a pretext to impeach him.

Oh, brother. This is getting more confusing by the hour.

You mean we’re still talking about the size of that inaugural crowd this past January? We’re still arguing over whether it measured up to what the brand new president of the United States called it — the largest gathering of human beings in world history … or something like that?

The National Park Service’s inspector general now says the agency didn’t mess with the crowd size estimates of Trump’s inaugural nor did it leak any information to the media.

The Hill reports on the IG’s findings. Read the story here.

This malarkey about crowd size seemed to get under the president’s skin early this year. Various media published pictures showing the crowd gathered in front of Capitol Building at President Barack Obama’s first inaugural in 2009 and compared it to the crowd that heard Trump’s speech this past January. Obama’s crowd was, um, quite a bit larger.

Trump didn’t like hearing that. White House press secretary Sean Spicer’s initial press briefing included a serious scolding of the media for failing to report that the president’s inaugural crowd was the largest in history. The pictures, though, tell a different story.

Will this spell the end of this mini-tempest? Probably not, as long as Donald John Trump is president of the United States.