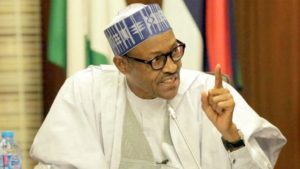 Words have this way of lasting forever. They become engraved indelibly on the public record. They enter what is called the “public domain.”

So it is with “sh**hole,” a term Donald J. Trump allegedly blurted out during a private White House meeting to describe African nations along with Haiti and El Salvador in our hemisphere.

Oh, but who comes a callin’ on the White House today? The president of one of those “sh**hole” countries, Nigerian President Muhammadu Buhari.

I’ll give President Buhari a measure of credit for declining to answer directly whether the issue of “sh**hole” came up during private meetings with the U.S. president.

Buhari told reporters he didn’t bring it up with the president. “I’m not sure about, you know, the validity of whether that allegation against the president is true or not,” Buhari said to reporters in Trump’s presence. “So the best thing for me is to keep quiet.”

Trump said today he would like to visit Nigeria, of which he said: “And in certain ways, I hear, from the standpoint of the beauty of a country, there’s no country more beautiful.” 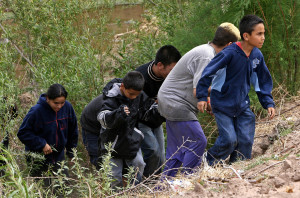 ROCKPORT, Texas — Do you ever wonder how yesterday’s crises manage to vanish into thin air?

Two of them come to mind today as I sit here on the Texas Gulf Coast, pondering this or that.

Both stories have disappeared from the world’s radar.

Were they resolved? No. The women and children still are missing. They might be dead by now for all we know. There was talk about Boko Haram releasing some of them, that the Nigerian government was working diligently to obtain their freedom. What’s become of that effort?

Our attention span gets diverted to other things so easily, it’s a shame that these one-time crises become old news.

Those innocent victims — in Nigeria and inside our own borders — still need our help.

As if Boko Haram needed to state a formal “pledge” to align itself with the Islamic State.

That’s what the Nigerian goons did. They have joined ISIL’s “caliphate” and joined with the monstrous Middle East terror group.

What does that mean, then, for Boko Haram? For my money, it puts them in the crosshairs of U.S. and allied military and intelligence forces.

The same fate should fall on Boko Haram, who burst into international notoriety by kidnapping those 200-plus young women and girls. They’ve kept their captives hidden for a year, despite reports in recent months about some kind of tentative agreement to release them.

The world already understands that Boko Haram is a serious threat to decent human beings everywhere. This group is the Nigerian version of Islamist extremism that is causing havoc throughout the Middle East.

So, this terror group has pledged its allegiance to ISIL. It also should draw a pledge from the United States and its allies to kill its members on sight.

While most of the world focuses on the Middle East brand of international terrorism — al-Qaeda, the Islamic State, Hamas, Hezbollah and the Iranian mullahs — another group of goons needs our attention as well.

The Boston Globe points out in an editorial that Boko Haram, the kidnappers of those young girls and the murderers recently of as many as 2,000 innocent victims, needs as much of the world’s attention as we can muster.

The murder of journalists and others in Paris in recent days has sucked much of the attention away from Boko Haram is doing in Nigeria, the Globe writes. The Paris shootings are “leaving little media attention for equally detestable atrocities by Boko Haram in Nigeria this month. The world ignores the Islamic extremist group at great risk both to Nigeria and the broader region. Boko Haram must be stopped in its tracks before it engages in mass murder again.”

When those girls and young women were kidnapped this past year, first lady Michelle Obama sought to lead an international outcry against atrocities against women. It had resonance for, what, perhaps a month or two? Then the world’s attention was pulled away to another international crisis. I cannot even remember which one it was, but we’ve stopped talking collectively about the fate of those girls.

The Boston Globe editorialized: “In a horrific new low, the militants have reportedly been using little girls as human bombs to inflict terror.”

And the world isn’t rising up in massive outrage over this?

President Obama once declared mistakenly — perhaps even foolishly — that the “war on terror is over.”

It is not, Mr. President. Even if we set aside the murderers running rampant in the Middle East — and we cannot do that — the Islamist monsters rampaging through Nigeria are causing untold grief and misery on thousands of innocent victims.

Once again, it is fair to ask: What about those girls?

Do you need any more evidence that the global war on terror is far from over, or that it may never end?

Terrorists are everywhere. Sort of like rats and cockroaches.

You kill one, a dozen or a thousand of them and more emerge to take their place.

They exist in all corners of the globe. They do their dirty deeds, recede into the background as the world’s attention is focused on other terror groups. Then they burst back.

Boko Haram is back in the news.

The Nigerian terror group that kidnapped all those girls and young women is now being “credited” with killing as many as 2,000 victims in a mass terror attack.

Boko Haram went on a rampage about a week ago, spraying villagers with bullets. Estimates put the death toll in the thousands.

Here’s how CNN.com describes the group: “Boko Haram has terrorized northern Nigeria regularly since 2009, attacking police, schools, churches and civilians, and bombing government buildings. The Islamist group has said its aim is to impose a stricter form of Sharia law across Nigeria, which is split between a majority Muslim north and a mostly Christian south.”

They’re just one group of terrorists. The others, well, we know about them, too.

I’ve noted already on this blog that we must take back these silly declarations of victory in the war on terror.

The war isn’t over. Not by a long shot. It may last forever.

The aim now is to keep fighting.

OK, I’m officially holding my breath over the news that 219 girls will be released from captivity by the terrorists who captured them.

Nigerian officials announced a cease-fire with Boko Haram, which then agreed to release their captives.

This could be one very bright spot in the middle of a torrent of very bad news of late.

You’ll recall this story, I presume. The world became tied up in knots over Boko Haram’s capture of the girls at gunpoint in April from a school in Chibok, Nigeria. The United Nations tried to pressure the terrorists to release them. Celebrities sprang forth from every corner of the globe to proclaim their dismay over the capture and treatment of the children.

Then the story faded from the public consciousness, as it often does when “big stories” are overtaken by other big stories.

Well, now there’s a glimmer of hope that the captives will be set free.

The deal reportedly includes the release of extremists being held by the Nigerian government.

Sure, this is going to be tough for some folks to swallow. Me? I have no particular problem with the deal that’s apparently been brokered.

If it returns those girls to their loved ones, then that’s reason enough to cheer.

World crises seems to cascade all around us so rapidly that they yank our attention from, um, previous world crises.

Well, several crises ago, the world was aghast at the kidnapping of 300 or so Nigerian girls by yet another terrorist organization, Boko Haram. Remember that story?

The girls were taken into the forest where they’re reportedly being held hostage. Boko Haram had been demanding some sort of ransom. U.S. intelligence and special operations forces had joined the Nigerians and other international organizations in the hunt for the girls.

What’s happened to that story? Where are the girls? What has become of the urgency that was being expressed from places like the United Nations, the Oval Office of the White House, from the State Department, from capitals around the world?

I shudder to think that we can handle only one crisis at a time. Syria once was the crisis du jour; then came Ukraine; next up was Gaza and the Hamas rocket attacks against Israeli neighborhoods. The world is now fixated on Iraq, ISIS and the attempted overthrow of a government that the United States helped install.

Meanwhile, those Nigerian girls are still being held somewhere, by someone, for some reason.

Please, someone tell me the world still cares about those girls.

Today is Earth Day, a time we set aside to ponder the future of the planet and whether we humans are being careful stewards of this relatively tiny orbiting object.

Are we doing enough to protect it, and ourselves? I don’t think so but I pulled a resource book off the shelf to illustrate something I noticed some time back.

The World Almanac and Book of Facts is an invaluable font of information. I found this on page 734 of the 2013 edition:

The world is going to add 2.3 billion more people between now and 2050, according to data collected from a number of credible sources, such as the U.S. Census Bureau, U.S. Department of Commerce and the International Programs Center. The world has roughly 7 billion inhabitants now; the number zooms to 9.3 billion in the next 36 years.

Let’s look at an individual country to see just how dramatic this explosion can get.

How about, say, Nigeria? The population of Nigeria, a country in central Africa, is estimated at 170 million people. By 2050, the population there will is expected to explode to 402 million.

Why single out Nigeria? Consider that the country comprises an area of 356,669 square miles, which is about the size of Texas and New Mexico combined. The United States population, which stands at 310 million people today, is expected to climb to 422 million by 2050. The U.S. comprises an area of roughly 3.7 million square miles, the third-largest land mass on the planet.

Some countries will see population decreases in this period of time, according to the World Almanac. They are largely in the Far East and in Europe.

I mention Nigeria only to ponder out loud: How does a country with such relatively limited living space care for all those people? And what will this explosion of humanity do to the land that supports it?