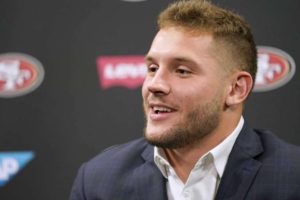 Donald J. “Football Cheerleader in Chief” Trump tweeted out his congratulations to a young man from Ohio State University, defensive lineman Nick Bosa, for being the No. 2 overall pick in the National Football League college draft.

Then there’s this item that has gotten a lot of attention on social media: Bosa is a known supporter of the president and he reportedly has “liked” posts from white nationalist groups on Facebook. Hey, that plays right into Trump’s wheelhouse, not to mention that Bosa has been critical of Colin Kaepernick, the former San Francisco 49ers quarterback who instigated the “take a knee” movement to protest police treatment of black citizens.

Oh, and what about the young man who was drafted ahead of Bosa? That would be Heisman Trophy winner Kyler Murray of the University of Oklahoma. The president hasn’t offered Murray any congratulations. Nothin’, man!

D’oh, I almost forgot: Murray, who hails from just down the road in Allen, Texas, is African-American. Did I mention that Bosa is white? Well, I just did.

I just have to wonder, coincidence . . . or is there something else at play here? I know what I believe. I’ll leave it for others to draw their own conclusions. 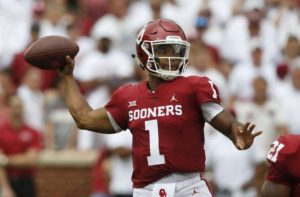 I believe Kyler Murray is a fine young man, apart from his being a first-class quarterback for the University of Oklahoma who has just been named the latest winner of the Heisman Trophy, signifying that he is the best college football player in America.

However, the young man is mistaken when he says college athletes should be paid.

Murray said this: “I feel like we bring in a lot of money to the universities … we put in a lot of work. Some guys don’t have enough money to bring their families to the games … so I feel like athletes should be compensated for it.”

Murray is far from the first person to make the argument. I just believe he is as mistaken and misguided as all the others who have said the same thing.

Where do I begin?

I’ll start here. Student-athletes already are “compensated” for their efforts. Granted, they don’t receive weekly paychecks, but many of them get a free college education in the form of full-ride scholarships.

I consider that a form of payment. Think about the ramifications. Student-athletes are allowed to receive a free education that presumably prepares them for life after their playing days are over. To suggest, therefore, that these athletes should become “professional athletes” defies the very principle of providing scholarships that help them fulfill the “student” portion of the term “student-athlete.”

Whether a student-athlete cracks the books and actually studies when he or she is not blocking/tackling/throwing TDs, or shooting hoops or hitting home runs is up to the student.

If they don’t cut it in the classroom, they ought to become academically ineligible to participate in whatever sport for which they are being “paid.”