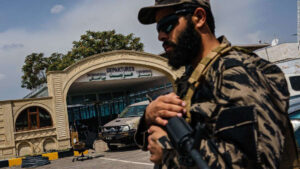 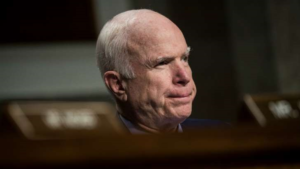 Hostin is a co-host of “The View,” the show that features a panel of women who sit around and gab about the “hot topics” of the day. Their guest today was U.S. Sen. John McCain, whose daughter, Meghan, has just joined the lineup of “The View.”

She asked the senator if he is “afraid of” Donald Trump, who has drawn a lot of fire from McCain over this and that issue since he became president The question drew howls of laughter from the audience — and from the senator!

“I mentioned that I had faced greater challenges,” McCain eventually replied once he stopped laughing.

Let’s see, how has the senator fared over the course of his life?

McCain graduated from the U.S. Naval Academy. Then he flew fighter jets during the Vietnam War. He got shot down over Hanoi in 1967. McCain was held captive for more than five years. He was tortured, beaten to within an inch of his life; he was held in isolation for months at a time.

McCain would be released in 1973. He ran for Congress, landing eventually in the Senate. He ran for president twice, losing the Republican primary in 2000 to George W. Bush and the 2008 general election to Barack H. Obama.

Oh, and then there’s this: He’s now fighting brain cancer with what I am believing is an iffy prognosis. Sen. McCain is in the middle of the fight of his life. Yet he is proceeding courage and is exhibiting the same fighting spirit he revealed when he was held by vicious enemy captors.

Is he afraid of Donald J. Trump — a man who knows not a damn thing about the kind of sacrifice that servicemen and women such as McCain have given to their country?

I cannot say this enough about Sen. McCain. I more often disagree with his policy positions than I agree with them. However, he embodies the very definition of courage.

I didn’t hear Hostin pose the question in real time, but I’ll presume she offered it in good faith.

The senator’s reaction speaks volumes about his opinion of the president of the United States.

I think I’ve officially heard all there is to hear.

Of all the things that have poured out of Donald Trump’s mouth, he finally said more than most Americans can handle.

He actually said that U.S. Sen. John McCain does not qualify as a war hero. He really and truly denigrated the service McCain performed for his country.

Is there anything that Trump will not declare off limits? Has this political buffoon said enough?

I am not a political fan of Sen. McCain. I do not like his world view. I didn’t vote for him when he ran for president in 2008. But as God himself is my witness, I truly admire this man’s service. I consider him to be a heroic figure.

And for Trump to ignite the firestorm that he’s ignited through utterly careless musings about someone who — in what passes for his political judgment — criticized him for earlier statements, well, that goes so far beyond the pale it defies Americans’ ability to express their rage in harsh enough terms.

Not only that … yes, there’s more, Trump did not serve in our nation’s military. He obtained student deferments during the Vietnam War. By my standard, Trump qualifies as a “chicken hawk,” who has zero standing to comment on someone who did serve — and did so with remarkable valor and, oh yeah, heroism.

McCain never has leaned on his service during the Vietnam War to promote a political cause. He was shot down over Hanoi in 1967; he suffered serious injuries as he parachuted into a lake in the middle of the city. He was taken captive, thrown into a cell, beaten nearly to death, suffered other forms of torture. He was placed into solitary confinement, brought out, beaten and tortured some more and then returned to solitary.

He was given a chance for an early release as a POW; the North Vietnamese thought they could get political mileage out of releasing young McCain early, as his father was a senior naval officer who helped shape U.S. war policy in Vietnam. McCain declined to be released. His payback for refusal? More torture.

That doesn’t qualify him as a hero?

Donald Trump has lost his marbles.

Former Texas Gov. Rick Perry, another GOP presidential candidate and an Air Force veteran, said Trump’s attack on McCain is a “new low in American politics” and demanded that Trump “immediately withdraw from the race for president.”

Aww, heck. Trump ought to stay in the race — and keep shooting off his mouth.

Vice President Joe Biden is prone to overstatement at times, which I guess every American knows already.

How about when he recently compared New York’s LaGuardia Airport like a Third World country.

Mr. Vice President, I’ve flown in and out of LaGuardia. Yes, it’s crowded and old. Third World country-like, however, is a serious stretch.

If you’ve flown into Belize City, or Phnom Penh, or Hanoi or Delhi, well, those are Third World airports. Actually, Hanoi and Phnom Penh have undergone serious upgrades and reconstruction since the times I flew into those terminal.

Athens’s airport — the one in Greece, the Cradle of Western Civilization — once looked like it began operating during Greece’s Golden Age. It, too, has been replaced by a modern, gleaming terminal.

I guess the vice president’s larger point is that infrastructure needs serious help in the United States. We keep falling farther behind other countries in the quality of our transportation amenities, and that includes airports, highways, bridges and rail lines.

“Just in the last decade the United States has fallen 20 spots when it comes to the quality of infrastructure in America. It’s embarrassing and it’s stupid. It’s stupid. That puts us literally behind. They rank us behind Barbados. Great country, one airport,” he said.

“Look folks, not a joke, we need to reinvest and modernize our whole infrastructure, especially in rail,” Biden added.

I’ll excuse Joe Biden’s overstatement about LaGuardia. His larger point is worth heeding.