Imagine my (non)surprise at news that the Biden administration said “no way” to a request to grant executive privilege stipulations to his immediate predecessor.

POTUS No. 45 asked No. 46’s administration to grant those privileges as the House select committee summons key aides to 45 to testify on what they knew about the events of 1/6.

President Biden’s team said “no way” to the request. Biden said in a statement that the nation needs to know the whole truth behind what happened on the day Donald Trump incited the riot that sought to overturn the results of the 2020 presidential election … which Biden won!

There’s no argument here as to what the House panel seeks. It wants all the information it get obtain. My sense is that the best place to look is into the records of those who worked most closely with the former Insurrectionist in Chief.

Go for it, House select committee! 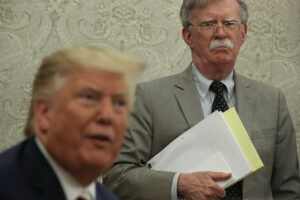 Jumpin’ jiminy, Mr. President. Now we get word that you’re thinking about invoking “executive privilege” as a way to keep John Bolton from talking to the U.S. Senate during its impeachment trial.

How come? You keep yapping that the impeachment is a “sham,” a “hoax,” a “witch hunt,” a nothing burger. Then up steps your former national security adviser, who seemed to balk initially at talking to the Senate, now says he’ll answer a subpoena if the Senate issues it.

He wants to talk out loud. He wants tell us what he knows about that so-called “perfect phone” conservation you said you had with the Ukrainian president. Yeah, I know Bolton called it a “drug deal,” and reportedly didn’t like the request you made of the Ukrainians to deliver on a “political favor, though.”

However, Bolton was thought to be your guy, Mr. President. You brought him in to give you some national security cred. Then you fired him, or he quit … whatever. And for what purpose? Because you and he weren’t on the same page. Hey, I get that the national security adviser works at the pleasure of the president, that he or she is not a Senate-confirmed individual, that you can hire and fire whoever you want for whatever reason you deem appropriate.

Does any of that mean Bolton is going to knife you in the back? Maybe. Maybe not.

Back to my point, Mr. President. You continually tell us that you’re in the clear. You’ve done nothing wrong. You haven’t abused the power of your office or obstructed Congress. Democrats in the House and Senate are conducting a fishing expedition … you say.

If all that is true, then what gives with the “executive privilege” nonsense? That’s what I believe it is, Mr. President. Nonsense! It’s a diversionary tactic that looks to me like the action of a man with something to hide from the public. 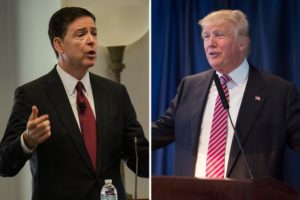 Let’s play out a certain scenario that’s being discussed in Washington, D.C. at the moment.

The White House isn’t saying what the president will do.

Trump fired Comey as FBI director while the FBI is in the midst of an investigation into whether the Trump presidential campaign colluded with Russians who were hacking into the 2016 presidential election.

The Justice Department has appointed a special counsel to lead the investigation.

If the president blocks Comey’s testimony, what are we supposed to presume? Might it be that Comey has something terribly damaging to tell senators — under oath — about whether the president obstructed justice by pressuring him to back off an investigation?

Inquiring minds might want to know. Don’t you think?